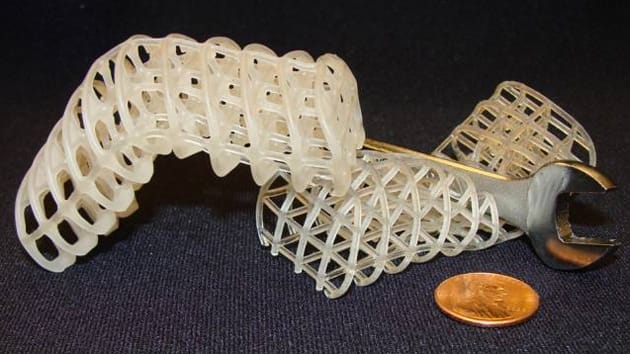 Robots tend to be either very rigid or very soft, but neither extreme is ideal; ideally, machines could both squish themselves into tight spaces and remain sturdy for strength-dependent tasks. They just might, thanks to a team-up between MIT and Google's Boston Dynamics. The two have developed a composite material that can switch between hard and soft states on the fly. The design mates a compressible foam inside with an external wax coating. If a robot needed to deform, all it would have to do is soften the right joints with a bit of heating. It could even heal damage by heating and cooling an affected area.

It's still early days, but there are already plenty of potential real-world applications for the material. DARPA (the impetus for the project) wants robots that can literally slip through the cracks to reach otherwise inaccessible areas; they could rescue survivors trapped under rubble, for example. MIT, meanwhile, pictures surgical bots that could repair hard-to-reach body parts. We're still a long, long way from the liquid metal of Terminator 2's T-1000, but these findings suggest that the concept of a shape-shifting automaton isn't completely far-fetched.

Via: TechCrunch
Source: MIT News
In this article: bostondynamics, chemicalrobots, darpa, flexible, google, heat, mit, robot, robots, science, soft, t-1000, video
All products recommended by Engadget are selected by our editorial team, independent of our parent company. Some of our stories include affiliate links. If you buy something through one of these links, we may earn an affiliate commission.