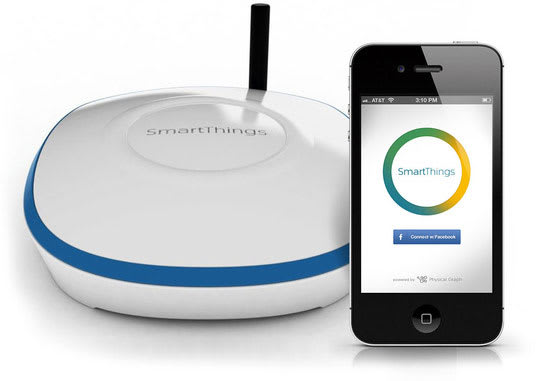 We know that Samsung isn't one to let any potential market segment pass it by, and according to TechCrunch, it's considering an acquisition that would put it in play in the suddenly expanding home automation business. The target? SmartThings, which would follow a recent theme of former Kickstarter projects being acquired by behemoths, and pump up Samsung's Smart Home efforts to match Google/Nest and Apple/Homekit. In case you've forgotten, SmartThings is the company that figures it can connect everything in your house to the internet through its Hub device and make them controllable from pretty much any mobile app -- if you're ready to handle that kind of responsibility. TC's sources put the proposed price at $200 million but caution that the deal may not be done yet, and we don't know where the just-announced Thread industry partnership would fit in with this. SmartThings' PR declined to comment on the rumor, but we'll go ahead and pencil in "Galaxy Lightbulbs/Door Knobs/Thermostats" for Samsung's next big unveiling just in case.

Source: TechCrunch
In this article: acquisition, Home Automation, HomeAutomation, rumor, samsung, SmartThings
All products recommended by Engadget are selected by our editorial team, independent of our parent company. Some of our stories include affiliate links. If you buy something through one of these links, we may earn an affiliate commission.