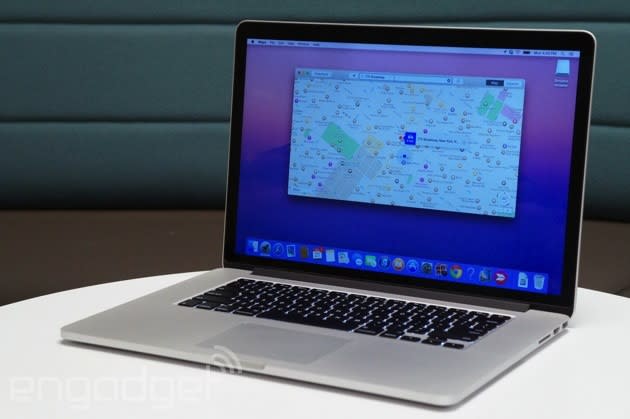 Well, this is a timely rumor: Today is the day Apple opens up OS X Yosemite for public beta-testing, and now we're hearing the final version of the OS will come out in late October. The report comes from Mark Gurman at 9to5Mac, who has a strong track record when it comes to Apple rumors, and he claims that in addition to OS X, Apple will release a 12-inch Retina display MacBook, and either an iMac or a standalone monitor with a 4K screen. Obviously, Apple could do a 180 and release the same old computers with minor spec bumps, but if you ask us, everything Gurman is reporting seems plausible. First of all, Apple already promised it would release a final version of OS X sometime in the fall, and surely it plans to do that before the holiday shopping season starts up in November.

Secondly, a Retina display MacBook Air has been rumored for ages now, and the way the laptop market is going, it seems Apple is going to have to release a Retina-grade Ultrabook sooner or later; it's already getting tough for us reviewers to make excuses for the Air's 1,440 x 900 screen when you can easily find Windows machines with 2,560 x 1,440 or 3,200 x 1,800 screens. As for the 4K all-in-one? That seems inevitable too, though we've admittedly heard less scuttlebutt about that one.

Both computers are expected to be available in late Q3 or early Q4, according to the report, but constraints having to do with Intel chipsets -- among other possible delays -- could push the on-sale date to early 2015. If Gurman is correct, we'll find out more at a fall media event -- again, very typical of Apple. The one thing we're not sure of? Whether the mythical iWatch will be there, as Gurman says. Because we've been hearing about that thing forever now. We'll believe that one when we see it.

In this article: 12-inch macbook, 12-inchMacbook, 4k, apple, imac, os x, os x yosemite, osx, retina display, retinadisplay, yosemite
All products recommended by Engadget are selected by our editorial team, independent of our parent company. Some of our stories include affiliate links. If you buy something through one of these links, we may earn an affiliate commission.