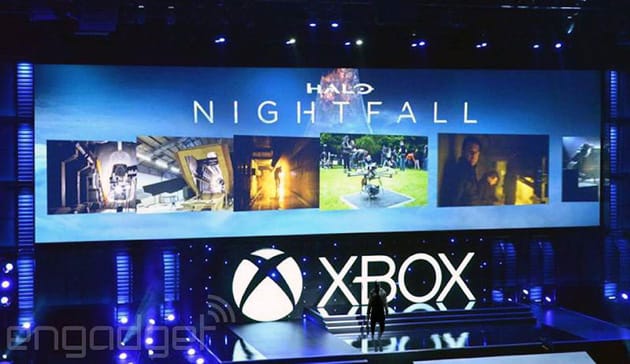 Back at this year's E3 we learned that Halo: Nightfall would tell the origin story for a new character in Halo's sci-fi universe, and we're finally getting to see some of the show in motion. And, well, there are a couple of instances where it looks pretty similar to the Alien not-a-prequel, Prometheus. That almost assuredly isn't a coincidence given the fact that Prometheus' director Ridley Scott is serving as executive producer for the show. It's hard to tell exactly how the episodic series is going to turn out based on a teaser trailer (embedded after the break), but we can tell you that in its 74 seconds there's a distinct lack of Master Chief and a whole lot of talk about an element that "selectively kills humans." How's that for mystery? You'll be able to check out the exploits of Agent Locke and his crew after Halo: The Master Chief Collection releases this November.

Update: Video of the entire Halo: Nightfall panel from Comic-Con is also embedded after the break. 10
Source: Xbox Wire, YouTube
In this article: gaming, halo, halonightfall, halothemasterchiefcollection, hd, hdpostcross, microsoft, nightfall, ridleyscott, sdcc2014
All products recommended by Engadget are selected by our editorial team, independent of our parent company. Some of our stories include affiliate links. If you buy something through one of these links, we may earn an affiliate commission.