ChargeSpot Pocket will wirelessly charge both Qi- and PMA-compatible devices 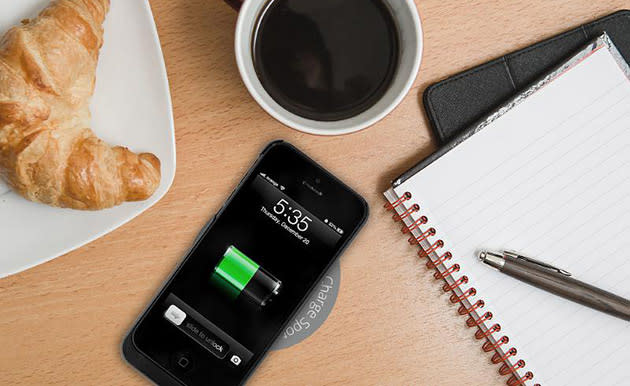 If a wireless charger doesn't work with a phone or tablet with the capability, it's likely because they adhere to two different wireless charging standards. See, there's more than one out there, and that's making it hard for businesses, venues, offices and even OEMs to adopt the technology. One product that could potentially help with those issues is a new wireless charger called ChargeSpot Pocket, which works with both Qi Wireless and PMA or Power Matters Alliance. Sure, that's just two standards out of three (leaving out the third one called A4WP), but the product can certainly cater to more customers than an alternative that works with only one standard can.

ChargeSpot Pocket was designed to be installed under surfaces to serve as hidden power sources -- for instance, restaurants can stick some under tables, and patrons can simply place their phones on the table to recharge. Business owners or managers can simply check its accompanying web interface to monitor usage. Some Canadian restos and offices already have ChargeSpot Pockets installed in their premises, but now more people can buy some through the company's website.

In this article: chargespot, mobilepostcross, WirelessCharging
All products recommended by Engadget are selected by our editorial team, independent of our parent company. Some of our stories include affiliate links. If you buy something through one of these links, we may earn an affiliate commission.