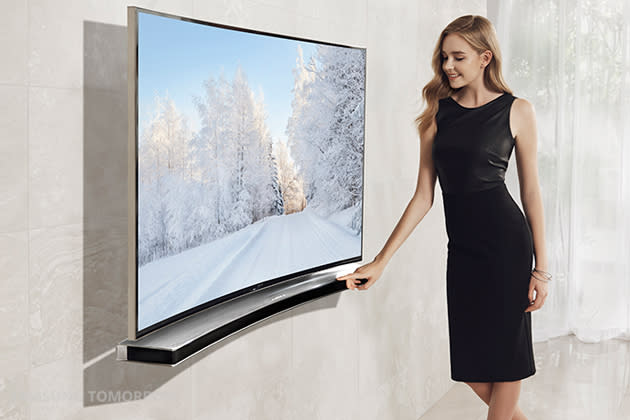 Let's say you bought a pricey curved TV, only to remember that your existing soundbar is (gasp!) flat. Will you have to live with that geometry mismatch for the life of your set? Not if Samsung has its way. It just unveiled the Curved Soundbar, which it says is the first audio system designed to match curved screens -- specifically, the company's 55- and 65-inch sets. The aluminum-clad device looks the part, of course, although it also promises some better-than-average audio with 8.1-channel surround support and side speakers that add to the immersion. There's no word on just when the curvy peripheral will show up or how much it will cost, but it's likely to sit on the higher end of the price spectrum.

There is some good news if you're not interested in expensive TV audio. Samsung is adding a low-end model, the M3 (below), to its multi-room wireless audio system. The firm isn't saying just what kind of output you'll get from the M3 right now, although it's safe to presume that the smaller speaker won't deliver quite as much oomph as the M5 or M7. It will, however, add rich Spotify Connect support; you'll get to stream your tunes through multiple M-series speakers at the same time. It's doubtful that the M3 will sway you from the Sonos Play:1 or other lower-cost wireless speakers that you might already own, but it's nice to have another major alternative.

Update: Samsung has revealed US pricing a few days later. The soundbar is selling in the US today for $800, which is fairly reasonable if you've already dropped several grand on a curved TV; the M3 is also available for $200, or right in line with the cost of a Play:1. In this article: audio, curved, curvedsoundbar, curvedtv, hdpostcross, ifa, ifa2014, m3, samsung, soundbar, television, tv, wirelessaudio
All products recommended by Engadget are selected by our editorial team, independent of our parent company. Some of our stories include affiliate links. If you buy something through one of these links, we may earn an affiliate commission.