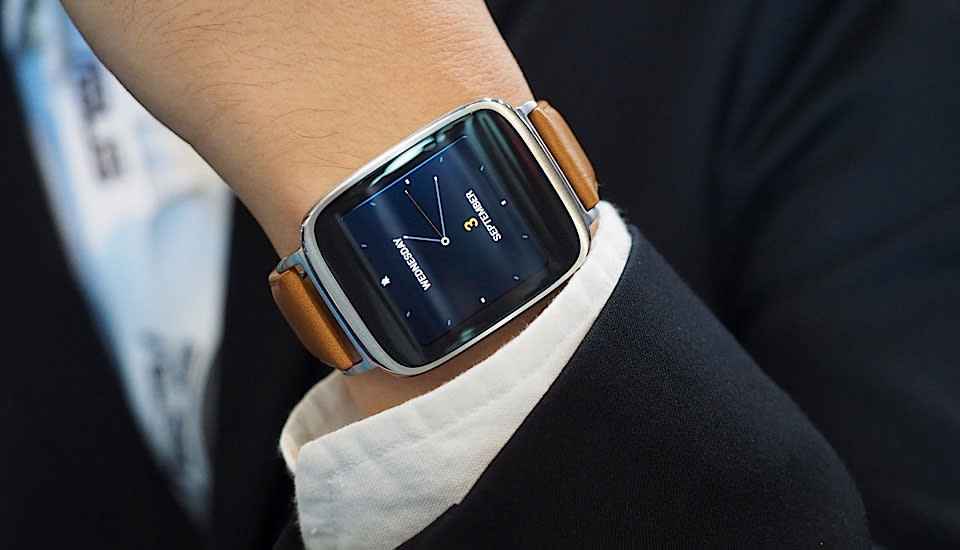 After its routine pre-show teasers, ASUS' first smartwatch has finally been unveiled at IFA in Berlin. It's no secret that this Android Wear-powered ZenWatch isn't joining the party of circular watch faces, but it's certainly done a nice job at packaging the 1.63-inch, 320 x 320 AMOLED touchscreen (as featured on Samsung's Gear Live). The body consists of a curved stainless-steel case surrounded by a rose-gold-colored band inset, and the top is dominated by a piece of 2.5D curved Gorilla Glass 3. You also get a genuine stitched-leather strap with a quick-release clasp out of the box, but you can swap it with your own 22mm band to suit your mood.

In terms of specs, the ZenWatch uses the same 1.2GHz Snapdragon 400 SoC as the Samsung Gear Live, the LG G Watch and its circular cousin, the G Watch R. You also get 512MB of RAM, 4GB of internal storage, a 1.4Wh battery (we're told it lasts over a day), Bluetooth 4.0 (duh), a microphone and a bio sensor that can monitor your heart rate plus activity. With its IP55 rating, you can take the ZenWatch into the shower to give it a good scrub. (Hey, smartwatches need love, too.) When you're low on battery, simply pop the ZenWatch on its charging cradle -- it's much prettier than the G Watch's -- to juice it up.

For the sake of consistency, ASUS has gone ahead and ported some of its ZenUI elements -- including the elegant design and apps -- from its recent portable devices over to the ZenWatch. Naturally, you're given a selection of watch faces to play with, so the real novelty lies within the ZenWatch's preloaded functions. These include "Watch Unlock," which lets you unlock your phone or tablet by simply touching the ZenWatch's watch face; "Tap Tap," which lets you toggle a pre-assigned function by double-tapping the watch; plus the self-explanatory "Cover to Mute," "Find My Phone," "Remote Camera" and "Presentation Control." The ZenWatch also has a wellness manager that tracks your heart rate, step counts and relaxation levels; plus it provides tips to help you reach your goals.

The prerequisite for using these features is that you need to install the ZenWatch Manager phone app, which also lets you set your watch face and locate the watch, as well as syncing the "What's Next" schedule manager, plus the "Do It Later" to-do list between your ZenUI phone and the watch. You'll also need to install the Remote Camera app and the ASUS Remote Link app on your phone -- the latter for using "Presentation Control" on the ZenWatch.

While we had a chance to take a close-up look here at IFA, the watches were in retail mode, so we weren't able to go in-depth on the watch's features. They were also tethered to cables, which prevented us from being able to try them on, but we'll update you with more hands-on impressions as the opportunity arises.

Alas, at €199 (about $260), the ZenWatch costs more than its Android Wear competitors, so hopefully there will be a bundle discount in select markets. Expect it to hit the stores sometime between late Q3 and early Q4 this year.

Daniel Cooper and Brad Molen contributed to this report.

In this article: android, androidwear, asus, ifa2014, smartwatch, snapdragon400, watch, wearable, zenui, zenwatch
All products recommended by Engadget are selected by our editorial team, independent of our parent company. Some of our stories include affiliate links. If you buy something through one of these links, we may earn an affiliate commission.