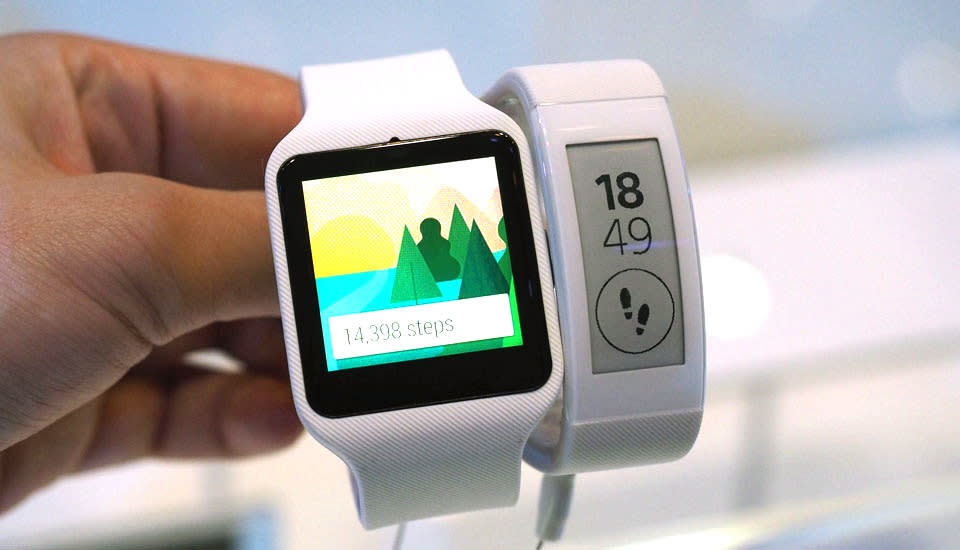 At today's conference in Berlin, Sony quickly announced two smart devices that happen to fit on your wrist. Both wearables are follow-ups to previous versions: The 229-euro SmartWatch 3, which is a plainly named Android Wear sequel, and the 159-euro SmartBand Talk, which takes last year's fitness band and adds an e-paper display, mics and speakers. Each device got some face time during Sony's presser, but they were overshadowed by the rest of the company's mobile lineup, so I spent a little extra time with them both after the show. Let's start with the SmartWatch 3, which uses a 1.6-inch square display. Compared to the ZenWatch, Moto 360 or the LG G Watch R, Sony's new offering isn't meant to be classy; it comes with a very sporty wristband that hugs the entire perimeter of the device, and unfortunately it just makes the watch look even larger than it already is. Keep this in mind if you're small-wristed (like I am), because you might constantly worry that it's going to eat your entire hand for dinner. You can replace the wrist straps, but they aren't the normal 22mm kind you use on your analog watch; you'll have to get them through more official channels, and there will be more strap color options beyond black and white sometime after its launch.

There's no special charging cradle or secret sauce here, so you just need to use your run-of-the-mill micro-USB plug to get it juiced up. And according to Sony, once it's fully charged, you can expect anywhere from two days of battery life to four days of standby. The sad news: That claim is actually an improvement over most other Android Wear watches, which are lucky to last that long on their best days. With a 420mAh battery, however, it's really not that much better than the G Watch or Gear Live, so I'm curious to see if Sony has some tricks up its sleeves. Additionally, it also has NFC, a waterproof rating of IP68 (just like the Z3 series phones), an ambient light sensor and a physical power key. And I believe there are a few things that Sony isn't telling us. The devices on display at IFA are in the infamous retail mode, which means you can't actually use it in real-life -- it just shows the same screenshots over and over. A vice president for Sony America told me that it may have some bells and whistles that other watches don't have, but he couldn't go into any more detail; given earlier rumors that the SmartWatch 3 may have a custom UI of some sort, I certainly wouldn't be surprised if we see a few more reveals between now and time of launch. Another clue: In its press release, Sony noted that this watch was the first one "specifically designed for the latest Android Wear updates" and would offer software innovation. Nothing like a good mystery!

What we do know is that the SmartWatch 3, in addition to the SmartBand Talk, is compatible with Sony's Lifelog Android app, which is available in the Play Store. The idea is that it logs various parts of your life, and I'm not just talking about fitness; it'll also track the music you listen to, the movies you watch, how much deep and shallow sleep you get each night and so on. All of the details will sync with your phone (if you're away from your device, it'll initiate the transfer once you're in range) and the app displays it in a handy chart and even shows an animated graphic that lets you see where you were and what you were doing at any specific time. The SmartBand Talk improves upon its predecessor by adding a mic, a couple of speakers, an altimeter for tracking hikes and climbs and a battery-sipping e-paper display (the first SmartBand had no display at all). Thanks to this, the tiny 70mAh battery should last you up to three days, according to Sony. It charges in less than hour, apparently, so its time plugged in will hopefully be just a tiny blip in your lifelog instead of a major disruption. (If you're using it to monitor sleep, however, just make sure it's not going to power off on you in the middle of the night.) And much like the SmartWatch 3 and Z3 devices, the band is waterproof.

The display itself shows things like the time, music you're playing and fitness activities like steps taken. It's activated via accelerometer, so it changes screens when you move your wrist around. There's also a volume button for your speakers if or when you want to make calls, and another button that changes the screen to preset panels that you can customize through your phone app. Sony was one of the earliest manufacturers to come out with a smartwatch, but now that everyone else is joining the party, it's tough to stay relevant. The watch is a tad on the expensive side, so whatever mysteries it holds need to be unique enough to turn heads; the band is a great improvement over the previous version, thanks to its display, but I'm concerned that the inclusion of a mic and speakers raised the price of the band a little too high. As always, we reserve our final opinions for the reviews, so be on the lookout for those sometime later this fall.

In this article: androidwear, hands-on, ifa2014, mobilepostcross, smartbandtalk, smartwatch, sony, sonysmartbandtalk, sonysmartwatch3, uk-feature
All products recommended by Engadget are selected by our editorial team, independent of our parent company. Some of our stories include affiliate links. If you buy something through one of these links, we may earn an affiliate commission.