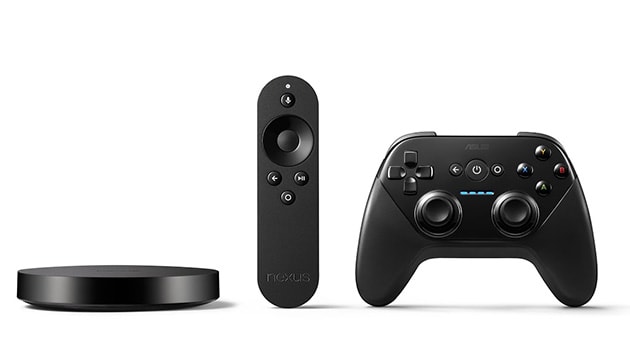 Remember the Nexus Q? Yeah, we'd rather forget it, too. Google regained its streaming cred with the Chromecast, and now it's looking to offer up another set-top box. The compact Nexus Player will handle streaming, games and run Android apps. An included remote wrangles navigation with voice controls for finding the content you're after on the ASUS-made gadget. For those gaming sessions, a $39 controller can be tacked on as an additional purchase. The Nexus Player will offer much of the same functionality as Mountain View's diminutive dongle, adding the ability to leverage those mobile apps as well. It's also the first device to run Android TV, an effort detailed back at I/O and promised to arrive alongside Android L, er... Lollipop. And yes, you'll be able to "cast" stuffs from other devices to your TV. In terms of content options, you can expect Netflix, Hulu, Food Network, Travel Channel and more for now -- but there's no mention of either WatchESPN or HBO Go. Inside, the unit packs a 1.8GHz quad-core Intel Atom processor, 1GB RAM, 8GB of storage and Imagination PowerVR Series 6 graphics. Intel tells us that 64-bit chip is capable of "console-like graphics" alongside 1080p video streaming. As you might expect, the Player will connect to your TV via HDMI with WiFi for grabbing content and Bluetooth for the included remote.

If all of that sounds somewhat familiar, Amazon's Fire TV touts a similar set of entertainment abilities for the same price. Of course, one taps into Prime Instant Video while the other leverages the Google Play repository. Speaking of cost, the $99 unit will be available on November 3rd, however if you're anxious to lock one down, you can pre-order the Nexus Player on October 17th.

Source: Google
In this article: android, gaming, google, hdpostcross, nexus, nexusplayer, set-topbox, settopbox, streaming, video
All products recommended by Engadget are selected by our editorial team, independent of our parent company. Some of our stories include affiliate links. If you buy something through one of these links, we may earn an affiliate commission.