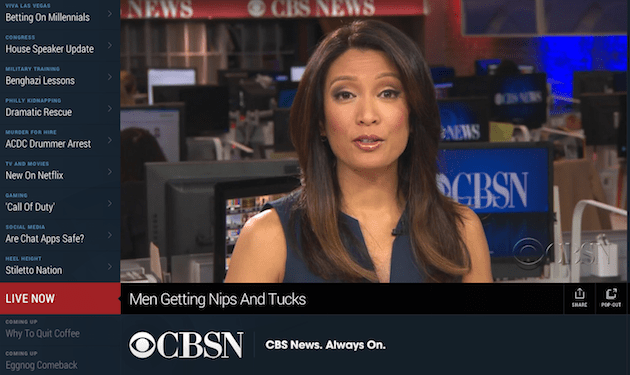 Yesterday, rumors began circulating that CBS was getting ready to launch a digital news network, and well... here it is. Just as Variety had reported, The Eye's new 24/7 streaming channel is named CBSN. But, what is it exactly? Simply put, it's CBS' answer to HuffPost Live, featuring 15 hours of live, anchored coverage on weekdays (from 9AM to 12AM ET), complemented by an on-screen interface with a list of topics being discussed throughout the day. Aside from its original productions, CBSN will also have simulcasts of special reports and breaking news from CBS sometimes, as well as other content from sibling properties like CBS News, CBSSports.com and Entertainment Tonight.

Additionally, CBSN is taking pride in the fact that it's launching on plenty of platforms from day one, such as Amazon Fire TV, Roku set-top boxes, Roku TV, within the CBS News app for Windows 8/Windows Phone 8 and, of course, on the web -- more are expected "before the end of the year." With CBSN and its recently launched All-Access TV service, CBS shows that it is preparing well for the digital era -- which, in the end, benefits none other than viewers like yourself.

The more the merrier.

Source: CBSN
In this article: CBS, CBS News, CBSN, CBSNews, hdpostcross, news network
All products recommended by Engadget are selected by our editorial team, independent of our parent company. Some of our stories include affiliate links. If you buy something through one of these links, we may earn an affiliate commission.