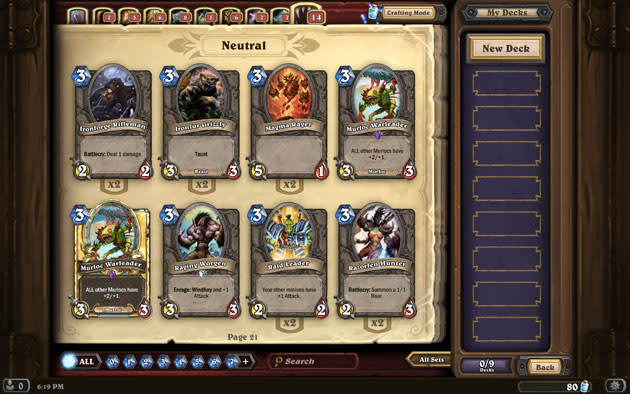 Recently picked up a Nexus 9 but you're still jealous of your iPad-toting pals because they can play Blizzard's Warcraft-themed card game? Well, relax because Hearthstone is coming to Android tablets (and early next year, phones). It's launching in waves, according to the publisher, starting with a roll out in Australia, Canada and New Zealand ahead of a worldwide release in a few days. And as a way to reward your patience -- the game initially launched back in April -- Blizzard is giving away a free pack of Classic Cards. Just finish a game in any mode and, well, you'll have some new cards to use. You don't even have to win! Perhaps even better? If you're coming in from another platform, your card collection and progress will transfer over to Google's mobile OS. Oh, and in case you want a peek inside the brains of a few of the folks who work on the game, check out this Reddit AMA from earlier today.

Update (12/16): And here it is -- we're not sure about the rest of the world, but Hearthstone is available on Google Play in the US.

In this article: android, australia, Blizzard, canada, hearthstone, mobile, mobilepostcross, NewZealand, tablet
All products recommended by Engadget are selected by our editorial team, independent of our parent company. Some of our stories include affiliate links. If you buy something through one of these links, we may earn an affiliate commission.