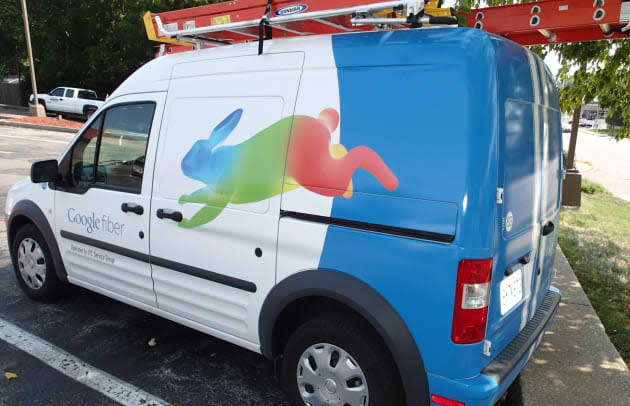 Verizon famously said that if the FCC heeds President Obama's urging and declares the internet a Title II utility, it would cause "great harm to an open Internet, competition and innovation." But exactly the opposite of that may happen, according to a letter from Google to the FCC. Mountain View pointed out that if broadband internet access is declared to be a Title II service, then Google Fiber should be granted the same access as other utilities to poles and other essential infrastructure. It went on to say that doing so would actually "promote broadband deployment and competition."

Google is often forced to dig trenches for its Fiber internet, limiting the highly sought service to just a few communities so far. That's because access to poles, ducts and conduits (at a tenth the cost) is limited by federal law to traditional cable TV and telecom suppliers. Google doesn't legally fit that definition, even though it provides internet-based TV and telephone services. It has had pole access hassles in the past with carriers like AT&T, which said last year that that it would cooperate more with Google only when it "qualifies as a telecom or cable provider" under federal law.

Google was quick to add that if the FCC didn't give it the same rights as cable or telecom providers under Title II, the result would be "a substantial barrier to network deployment by new providers such as Google Fiber." The search giant has been quiet on internet regulation so far, and the FCC letter isn't exactly an endorsement of Title II. But Google's position is a tad more optimistic than other telecoms and cable services, provided that it also gets the same rights they do. Former FCC Chair Reed Hundt told the WSJ that "if Title II gives Google pole access, then it might really rock the world with broadband."

In this article: access, ATT, Broadband, Comcast, FCC, google, GoogleFiber, TitleII, Verizon
All products recommended by Engadget are selected by our editorial team, independent of our parent company. Some of our stories include affiliate links. If you buy something through one of these links, we may earn an affiliate commission.