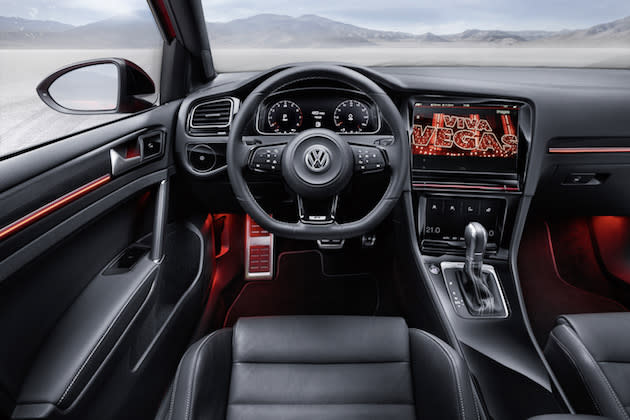 Volkswagen's wading into the connected car space in a few different ways including more autonomous driving. First up is the Golf R Touch hatchback. It's sporting three displays on the dashboard, with two being touchscreens. A positively massive 12.8-inch main console rests above an 8-inch control center on the dash, while a 12.3-inch instrument cluster -- likely trickle-down tech from subsidiary Audi -- resides behind the steering wheel. The screens are all high-res (SlashGear reports the main screen is running at 2,560 x 1,700) and were designed to eliminate distractions and maximize customization. How's that? The stage demo included camera-based gesture control and drag-and-drop movement of key functions that looked pretty simple. There's a touch-strip below the main screen that tracks tactile input (and offers haptic feedback) for things like adjusting the radio volume as well. Here's to hoping the advancements help improve muscle memory and look-free adjustment seeing as all mechanical knobs've been killed. Furthering that is the 8-inch control screen's system for touch feedback for media and climate control systems. Of course, the Golf R Touch is just a concept at this point so it isn't clear if or when we'll see these systems make it into production.

Next, we have the automaker's coming vision of its assisted parking system. Trained Parking works using cameras to, well, train itself to how you park and your common maneuvers, and the company claims that eventually the car could put itself on an inductive charging plate. The more immediate plan though, is to allow the driver to control parking maneuvers via smartphone, sort of like Tesla's solution.

And speaking of phones, Volkswagen's new App Connect platform brings in both Android Auto and Apple's CarPlay systems for in-car control of your smartphone. Unlike the rest of today's announcements, this latter one has a release window: before the end of the year.

In this article: androidauto, automotive, carplay, CES, ces2015, GolfR, golfrtouch, transportation, volkswagen, vwappconnect
All products recommended by Engadget are selected by our editorial team, independent of our parent company. Some of our stories include affiliate links. If you buy something through one of these links, we may earn an affiliate commission.