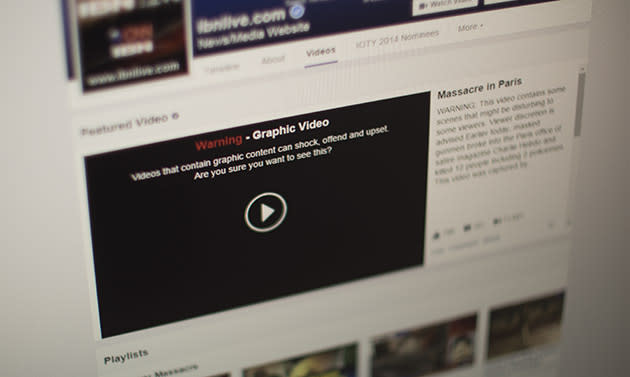 Facebook now restricts extreme and violent content in feeds by posting warnings and preventing minors from seeing certain videos. The social net has never permitted material that may "glorify violence," but generally allowed news and documentary images depicting executions and other brutality in the interests of free speech. However, following pressure from advisers, it elected to roll out warnings for such videos and disable the usual auto-play option. One of the first videos to get one was the violent execution of a policeman who responded to calls at the terrorist attack on Charlie Hebdo.

Facebook has made a strong push lately to challenge YouTube in video content, and recently announced that it now serves a billion plays per day. But it also allows users as young as 13 years old to sign up, and was recently taken to task for showing gruesome beheading videos without any warnings. Users who declare that they're younger than 18 now won't see violent content, which should help prevent many from stumbling across it in their news feeds. As the BBC pointed out, however, it certainly won't stop a determined minor from actively seeking out such content through fake accounts and other means.

In this article: disturbing videos, facebook, feeds, free speech, graphic videos, warnings
All products recommended by Engadget are selected by our editorial team, independent of our parent company. Some of our stories include affiliate links. If you buy something through one of these links, we may earn an affiliate commission.