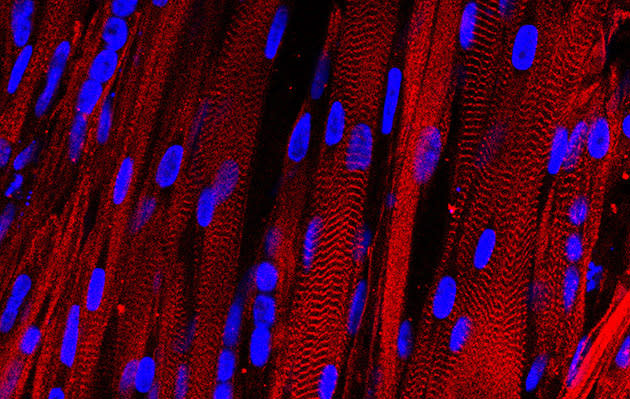 A team of researchers from Duke University have grown human skeletal muscles in the laboratory -- muscles that actually function and react to stimuli like their real counterparts. In order to do so, the scientists took cells that have already progressed beyond stem cells, placed them on a scaffolding with nourishment and waited for them to align into muscle fibers. That sounds easy written down, but the truth is they still had a tough time making it happen. According to one of the researchers, Lauren Madden, it took them "a year of adjusting variables like cell and gel density and optimizing the culture matrix and media" despite their experience growing animal muscles.

Once they got past that hurdle, the team started a series of tests to determine whether they worked like the real thing. They found that it contracted or twitched when electrified, something which they claim is a first for lab-grown muscles. The muscles also reacted to drugs the same way real ones do, which was great news for the scientists, as their ultimate goal is for their creation to be used to provide personalized medicine. As study leader Nenand Bursac said: "We can take a biopsy from each patient, grow many new muscles to use as test samples and experiment to see which drugs would work best for each person." Too bad IBM's DNA Transistor never materialized: these muscles and that nanopore DNA sequencing device could have been the dynamic duo of personalized medicine.

In this article: dukeuniversity, health, muscle
All products recommended by Engadget are selected by our editorial team, independent of our parent company. Some of our stories include affiliate links. If you buy something through one of these links, we may earn an affiliate commission.