Postmodern dining with the Japanese art of useless gadgets

Dongle 'fixes' your PC's security by killing your USB port

Pocket ghost detector may be as hard to find as its targets (update: details) 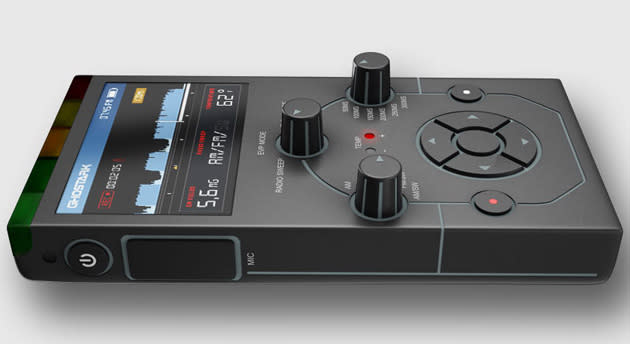 Let's get this out of the way: ghost detection is based on junk science. It's trying to prove something that's unprovable almost by definition, using theories that have little connection to the real world. But if you are going to chase phantoms, you might as well have the best technology at your disposal, right? GhostArk certainly thinks so. It's developing a pocketable ghost detector that supposedly has everything you need to track down supernatural beings, including an electromagnetic field meter, high-sensitivity microphones, radio frequency sweeping and sensors for both atmospheric pressure and temperature. Think of it as an audio recorder on steroids -- you can even add white noise to "bolster the spirits' strength." It's a clever concept, even if none of its findings would stand up under academic scrutiny.

The scientific method isn't this gadget's only nemesis, though. There's also a question of whether or not it'll become a tangible product, at least in a reasonable time frame. GhostArk wants to ship its haunt-hunting machine this summer, but the only public details at the moment are 3D models and a batch of vague testing claims. For now, it's about as imaginary as the ghosts it's meant to track down. We've reached out to the company to get a sense of its progress, and we'll let you know if there's more to share. Either way, you'll probably want to think carefully about shelling out $199 ($249 at retail) for a device that's unlikely to ever live up to its billing -- arguably, you'd get more mileage out of a Ghostbusters model car.

Update: GhostArk tells us that it already has a "beta" detector that's relatively close to the eventual product, and hopes to have a finished prototype in May.

In this article: crapgadget, detector, ghost, ghostark, ghostdetector, ghosts, handheld, paranormal, skepticism, supernatural
All products recommended by Engadget are selected by our editorial team, independent of our parent company. Some of our stories include affiliate links. If you buy something through one of these links, we may earn an affiliate commission.