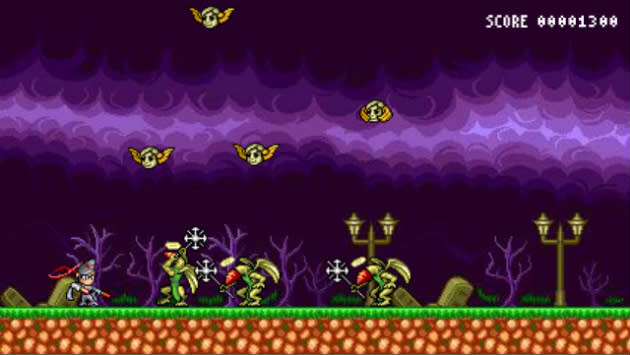 Nintendo essentially saved Bayonetta 2 from cancellation, which pleased many Wii U fans given it became one of the best-reviewed games of 2014. However, if you're one of the people that's yet to buy Nintendo's latest home console, you can still get a fresh fix of Platinum Games' shapeshifting witch. The developer just released a free browser game that has you fending off waves of supernatural monsters in a retro 2D shooter. The controls are ridiculously simple -- space to jump, enter to shoot -- but in true Platinum fashion, they're devilishly hard to master, especially when the number of enemies on-screen keeps increasing. Funnily enough, this isn't the first time we've seen the game either; the company once teased a similar-looking title as an April Fools' joke five years ago. This isn't quite as ambitious, but it's still a terrific way to waste five minutes on your lunch break.

In this article: Bayonetta, bayonetta 2, bayonetta-2, browser game, nintendo, Platinum Games, Platinum-Games, wii u
All products recommended by Engadget are selected by our editorial team, independent of our parent company. Some of our stories include affiliate links. If you buy something through one of these links, we may earn an affiliate commission.