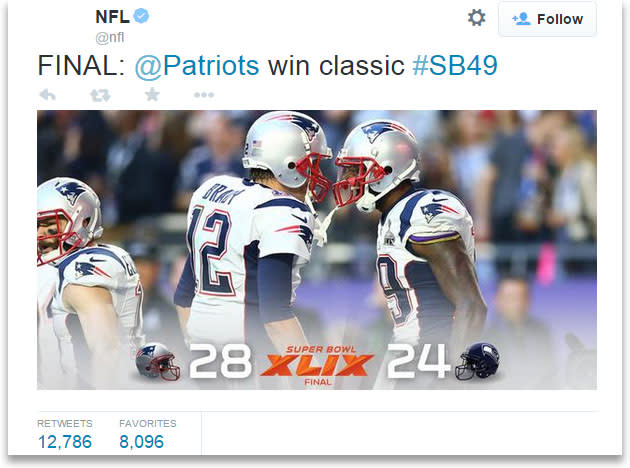 Gridiron football isn't exactly a world game, but the spectacle of the Super Bowl still draws nearly a billion viewers who do a heckuva lot of tweeting. It just horse-collared its previous Twitter record with around 28.4 million tweets from around the globe, easily surpassing last year's mark of 24.9 million. This year's edition did have a lot going for it: a tight match, a crazy finish, all those pricy ads and the whole Katy Perry dancing shark hoedown. But despite all that, it still couldn't touch the World Cup, which triggered 32.1 million tweets for the finale and 35.6 million for the Germany vs. Brazil semi-final matchup. And most of those likely involved the game, not a gigantic animatronic tiger.

In this article: dancing sharks, katy perry, record, super bowl, tweets, twitter, video
All products recommended by Engadget are selected by our editorial team, independent of our parent company. Some of our stories include affiliate links. If you buy something through one of these links, we may earn an affiliate commission.