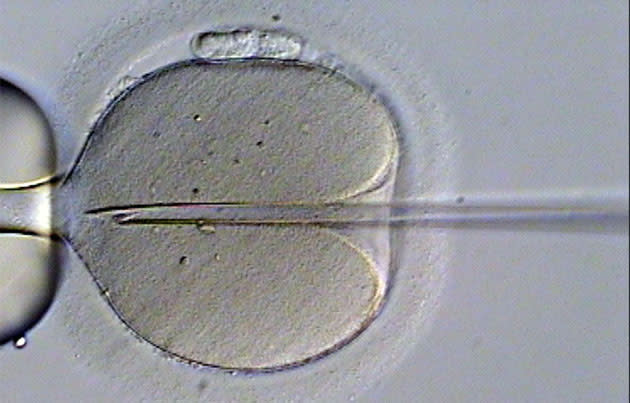 The UK's House of Commons overwhelmingly voted in favor of a law that would allow scientists to genetically engineer babies from the DNA of three people. Before your mind wanders to some of the more... salacious possibilities, the technique -- a spin on traditional in vitro fertilization -- is meant to help women with mitochondrial disease have families without fear of passing the illness down.

It's a hell of an illness, too. The mitochondria lurking in each of your cells acts as power plants, and when they don't work properly, everything from muscle growth issues to neurological problems to heart disease could develop. Since it's an affliction that strikes the body's own building blocks, there's no real cure -- just ways to make it a little more manageable. Thing is, mitochondrial DNA is passed down to a child exclusively from its mother so if hers is somehow screwy, her kids will have to deal with it too. That's what make this newish procedure so exciting; healthy nuclear DNA is culled from the mother-to-be and transplanted into the egg of a donor. When that egg is fertilized, voilá! You've got a baby made from three people.

When all is said and done, only a fraction of a fraction of the resulting baby's DNA will come from that second woman (think on order of 0.1 percent). There's no risk of the kid looking like a veritable stranger either, since the nuclear DNA from the primary mother (and not the mitochondrial DNA from the donor) is what helps define a child's appearance. Naturally, there's pressure from religious groups and ethicists to put the kibosh on the technique since it could lead to some unpleasant doors opening down the road, but they're still safe for now -- there's still another vote to get through before this all becomes strictly legal.

In this article: babies, dna, fertilization, genes, in-vitro, ivf, mitochondria, science
All products recommended by Engadget are selected by our editorial team, independent of our parent company. Some of our stories include affiliate links. If you buy something through one of these links, we may earn an affiliate commission.