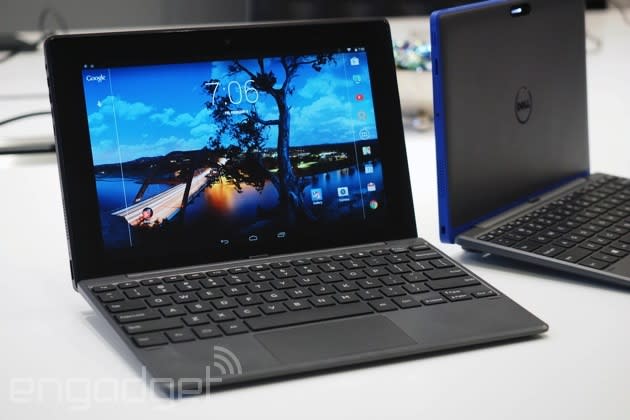 After winning a Best of CES Award last month and then releasing what appears to be everyone's favorite new laptop, Dell is already back in the news: The company today announced not one, but four new products. And they run the gamut too, including a Chromebook, a Windows laptop and a tablet that runs either Android or Win 8. While this might seem like a random assortment, they all have this in common: They're aimed at classrooms, and were designed to take a beating from careless children. 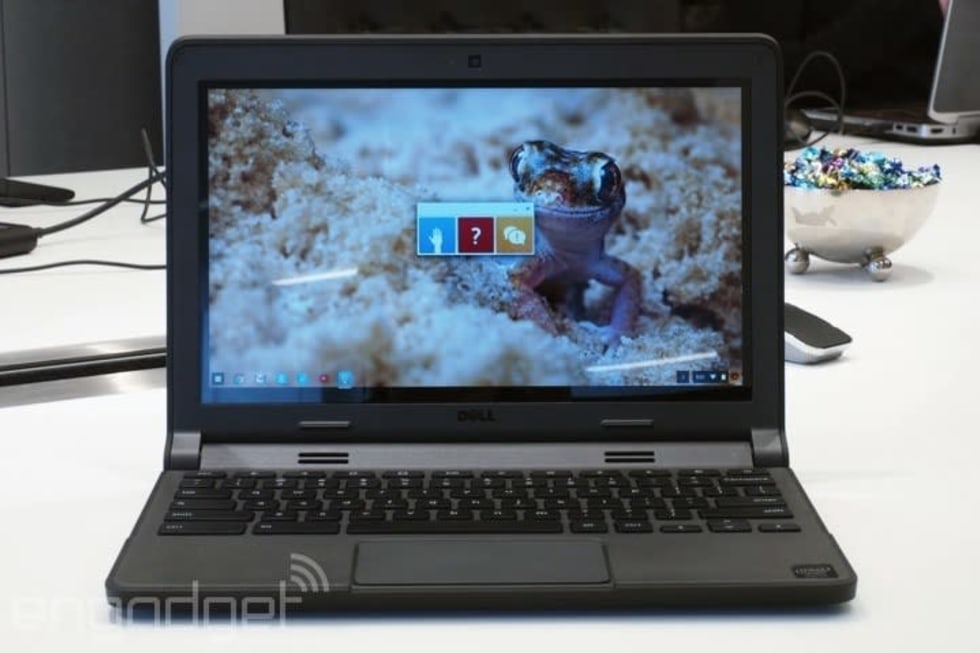 Starting with the new Chromebook 11, it takes the place of last year's model, with a more durable design that includes a 180-degree hinge that can stay intact even if students decide to dangle the laptop by its screen. (They do that sometimes.) Dell also sealed both the keyboard and trackpad, making them immune to the occasional chemistry-class spill. As for the 11.6-inch, 1,366 x 768 display, school districts can configure it with either a touchscreen or an anti-glare panel but either way, it's covered in Gorilla Glass to ward off scratches. On the inside, the Chromebook runs a new Intel Celeron CPU, along with a 10-hour battery and a faster 802.11ac WiFi radio. Nothing revolutionary there; just a spec bump. If anything, it's the lid that's most interesting. Dell installed a so-called Interactivity Light that glows red, blue or yellow depending on the context. For instance, a student could use an onscreen dashboard to have the light shine red when they have a question, or blue when they want to raise their hand. (Maybe yellow if they want to join in a conversation.) As it happens, Dell already has a kids' laptop with an LED indicator that shows if kids are online, but Dell imagines even more use cases here. Perhaps teachers could split the class into smaller discussion groups by automatically assigning each student a color, or maybe students could use their colors to silently cast votes -- "Which Presidential candidate would you vote for?" and what have you. Surely developers will have some ideas there too.

Lastly, Dell unveiled two 10-inch tablets for classrooms: the Venue 10, which runs Android Lollipop, and the Venue 10 Pro, which uses Windows 8. Both have a plastic shell, available in blue or black, with a reversible keyboard dock that allows you to put the screen in facing away from you. (Think: Something similar to "Stand" mode in Lenovo's Yoga line.) The screen can also be configured with up to full HD resolution, and comes standard with a pressure-sensitive Wacom pen digitizer. That said, you'll need to pay extra for the stylus, which means the tablets are more "pen-ready" than anything else. Finishing our tour, both models have a microSD reader, SIM tray for optional LTE, lock slot, full-sized and micro-USB ports and a network activity light to show teachers when kids are doing something online. Both pack a quad-core Intel Atom processor and are rated for 10 hours of runtime. The only difference: The Android version has NFC to support Google's "Bump" feature. The Chromebook is on sale today, starting at $249. There will also be a Windows 7/8 version (the Latitude 3160) available in March, which features the same design, except it has an Ethernet jack and is missing an Interactivity Light. That'll be slightly more expensive, at $299-plus. The tablets meanwhile, will go for $299 $330 regardless of which OS you pick. If you want a keyboard in the box, the price goes up to $349 $380. Look for those in March as well: the 3rd for the Venue 10 Pro, and the end of the month for the Android-based Venue 10.

In this article: chromebook, chromebook11, chromebooks, ChromeOs, classrooms, dell, DellChromebook11, dellvenue10, dellvenue10pro, education, google, hands-on, venue10, venue10pro
All products recommended by Engadget are selected by our editorial team, independent of our parent company. Some of our stories include affiliate links. If you buy something through one of these links, we may earn an affiliate commission.