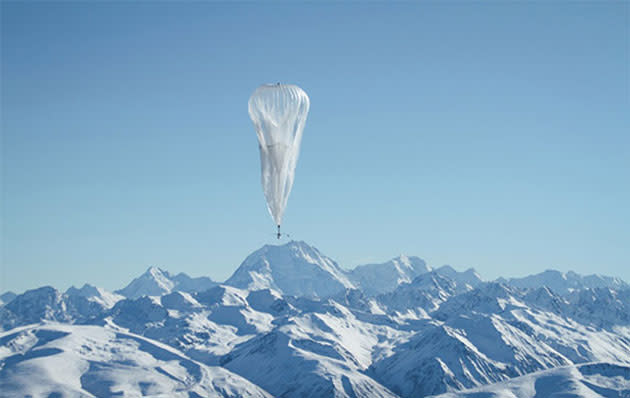 Google's aerial ambitions continue unabated. Need proof? Just talk to Sundar Pichai -- just before he sat down for a Q&A with Bloomberg's Brad Stone at MWC, the Google SVP confirmed the company's internet-beaming Titan drones would take their flight in the coming months, and that its Project Loon balloons now stay afloat for "six months at a time." The last time Google decided to speak publicly about its fleet of internet-beaming Project Loon balloons, they could languidly hang in the atmosphere for about 100 days. That's not a bad stretch considering these things can now deliver LTE data speeds to devices on the ground, but Google's got these things running even better than before.

Work on Project Titan is progressing a little more slowly, which is hardly a shock considering the complexity involved with developing, maintaining and flying a batch of solar-powered internet drones en masse. To hear Pichai tell the tale, its vision of drones is about as far along as Project Loon was a few years ago -- that is, Titan is still really in its infancy.

Though it's still a little ways off, Titan's forthcoming launch means big, big things for Google's aerial internet plans, and it's all because of how it's designed to work in tandem with Loon. See, thanks to some clever, algorithmic orientation smarts (and the eventually deployment of a whole fleet of balloons), Google's Project Loon is meant to transmit internet connections to wide swathes of land below it. Meanwhile, the Titan drones (which were very nearly snapped up by social giant Facebook) are obviously mobile and can target internet connectivity down at areas that really need it, like disaster zones. Between them, Google's quest to bring the web to the people and places that can't easily get it now seems less like something out of a pulp sci-fi novel and more like a meaningful way to connect us all.

In this article: balloon, drone, google, internet, mobilepostcross, mwc2015, projectloon, projecttitan, sundarpichai
All products recommended by Engadget are selected by our editorial team, independent of our parent company. Some of our stories include affiliate links. If you buy something through one of these links, we may earn an affiliate commission.