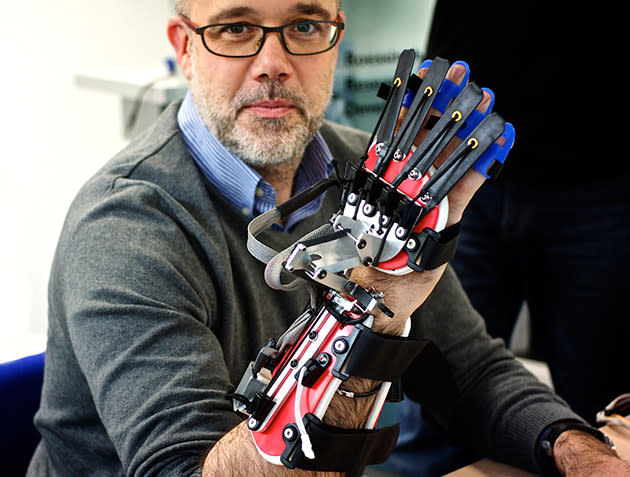 What's the best way for stroke patients to gain back full control of their hands and arms? If you ask this particular team of University at Hertfordshire researchers, they'll tell you it's with the help of a robotic glove called SCRIPT or Supervised Care and Rehabilitation Involving Personal Tele-robotics. It's designed to fit over a patient's hand and forearm and is paired with a therapeutic game. This game prompts users to move every finger, wrist and arm to navigate a labyrinth or to catch fish, for instance, as part of their therapy at home.

This project focused on therapies for stroke patients at home. Our goal was to make motivating therapies available to people to practise at home using this system, hoping that they have a vested interest to practise and will do so. We tried this system with 30 patients and found that patients indeed practised at home, on average around 100 minutes each week, and some showed clinical improvements in their hand and arm function.

The researchers have been developing SCRIPT for the past three years, coming up with two prototypes and spending over $5 million on the project since then. Now that the latest version has passed the proof-of-concept stage, the team is looking for a way to bring it to production for people who'd love to do therapy while playing games.

In this article: gaming, medicine, PhysicalTherapy, robot, script
All products recommended by Engadget are selected by our editorial team, independent of our parent company. Some of our stories include affiliate links. If you buy something through one of these links, we may earn an affiliate commission.