Confession time: I'm a bit of a wannabe when it comes to self-quantification. The idea of counting every step I take, every calorie I eat, every day I don't have a cigarette and every minute I lie in bed restlessly tossing and turning sounds great. I want to be able to look at my life as a series of easy-to-understand numbers that I can act upon to improve myself. And every time I review a new wearable or fitness tracker I think, "This'll be the one to make it stick." The latest in the long line of would-be life-changers is the $250 Fitbit Surge. The combination of GPS running watch, step counter and sleep tracker appeals not only to the number nerd in me, but also to the semi-serious runner as well. It also appeals to the "someone trying to cut down on the clutter in their life" part of me. Why do I need a separate pedometer, GPS running watch and a regular watch? But the big question is: Can the Surge lock me into not just an ecosystem, but also a system of life-tracking and life-changing habits? 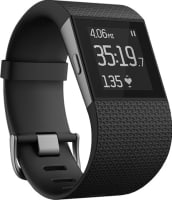 So, spoiler: I'm not wearing the Surge anymore.

We'll get to the reasons why shortly, but first let's talk about what the Surge does well. The one feature that immediately jumps off the page at you is built-in GPS. Yes, the Surge marks Fitbit's first foray into serious running watch territory. It's not the fastest or most accurate GPS in the world, but it gets the job done most of the time. It reliably takes about 60 seconds to lock on to a signal (all of our tests took between 58 and 63 seconds), and spits out a reasonably accurate map of your run. It did lose signal once and the resulting map showed me careening wildly around my neighborhood. But I've also experienced this problem when using RunKeeper on both Android and iOS; it's annoying, but not unheard of. And it's certainly less infuriating than the time the Microsoft Band left me running in place for 15 minutes while it repeatedly failed to get a GPS lock.

Like many other fitness trackers starting to hit shelves, the Surge has a heart rate monitor built in. Don't expect medical-grade heart monitoring, but it will give you a pretty accurate average heart rate for your run. Partially thanks to this new sensor, the Surge is dramatically better at sleep tracking than past Fitbits. As long as you don't have sleep tracking set to sensitive, that is. For the first week or so I was wearing the Surge, it seemed as if Fitbit couldn't do simple math. The app would say I slept from roughly midnight to 7AM, but only managed to get two and a half hours of sleep. On the plus side, Fitbit can now automatically detect when you're sleeping. Obviously, the Surge also counts steps. That's the whole idea of a Fitbit, really. They're connected pedometers above all else. And like its stablemates the Charge and Charge HR, it does a perfectly admirable job of keeping tabs on just how much you're moving throughout the day. The new material isn't any less likely cause rashes if you never take it off, but it is extremely soft and comfortable. In fact, it feels less like plastic and more like a hi-tech fabric used in expensive athletic clothes.

You're not going to mistake it for your trusty Timex Weekender.

Unfortunately, it's also a bit bulky. It's not as cumbersome as many smartwatches on the market, but you're also not going to mistake it for your trusty Timex Weekender. It will occasionally get in the way and it won't fit neatly under the cuff of a long-sleeved shirt. The wide band and distinctly athletic design also mean it looks quite conspicuous. More than once while out and about, friends gave me quizzical looks and asked, "What is that?" That's because when you go out wearing the Surge, you look like you're always getting ready to go for a run. And that's a problem. Activity tracking is only really useful if you're doing it all the time. If you don't want to wear it while you're not exercising, it kind of defeats the purpose. To make matters worse, it's not really a great watch. The touchscreen is far too sensitive and is rarely actually showing the time when you look at it. More often than not, you'll find you've somehow navigated to the number of flights of stairs you've climbed. Thankfully it takes several button presses to fire up the GPS; otherwise I'm pretty sure you'd start tracking a run in your sleep. And then there's the battery. Best-case scenario: You're getting a week on a charge. So much as look at the GPS, though, and that will dip to about five days. If you're wearing it to train for a marathon? Expect something closer to two. The Fitbit app is light-years beyond where it was back in 2013 when I first strapped one of the company's devices on. Visually, it's brighter, more coherent and generally just looks like a modern smartphone app. But more importantly, the calorie-counting portion of the app is finally good enough to run with the big boys. Where in the past it didn't take much to stump its food database (really, you've never heard of Goya?), now Fitbit is overflowing with results and nutritional data. And finding that information is easier than ever thanks to the addition of a barcode scanner (finally!).

The calorie-counting portion of the app is finally good enough to run with the big boys.

The other big advance is that Fitbit can finally automatically detect when you're asleep. That means no more remembering to press a button to tell the wearable it's bedtime. And, as mentioned before, if you don't turn on "sensitive" mode the sleep tracking is actually pretty accurate. From there you can dig through the collected data and start looking for those disturbing trends, like the fact that I average about four and a half hours of sleep a night during the week and that it takes me almost an hour to really settle into a restful sleep.

Fitbit still isn't the most intuitive or polished app on the market. I certainly wouldn't suggest handing it to your grandfather without an extensive tutorial. But it shouldn't give you a migraine if you're patient. Tracking exercise is at least a more visually appealing experience than in the past, and the addition of GPS maps makes it feel like a fuller solution for the more athletic out there. Plus, if you're not super into Fitbit's built-in tools, you can always connect it to other services like MyFitnessPal, RunKeeper or even use If to turn your sleep patterns into boring-ass spreadsheets with Google Drive.

One area that Fitbit seems to have ignored, however, is notifications. Specifically, the ability to push text messages and caller-ID info to the Surge. There's a pretty significant delay between when a message comes in and when it shows up on your wrist. Plus it's not entirely clear how you dismiss notifications, and they're completely passive; you can't reply without taking out your phone. So here's the weird thing: Since the Surge adds GPS, it means that Fitbit's competitors aren't just Nike and Jawbone anymore, but also Garmin, TomTom and Microsoft. Actually, in terms of features, the Surge's closest relative is the Microsoft Band. Sure, you can't get Twitter notifications or dictate responses to Cortana, but it does a heck of a lot more than just count your steps. Like Microsoft's wearable experiment, the Surge is supposed to go with you throughout the day. It's supposed to count every step from your door to the bus stop. You're supposed to tell it when you're doing calisthenics or going for a run. And when you turn in at night, it's supposed to measure just how much shut-eye you're getting. Of course, the Surge is far more comfortable than the Band, and its battery lasts much longer.

If you just want to track how much you're moving around during the day, the Charge HR is a cheaper and sleeker solution. Fitbit's mid-range device keeps the heart rate monitor and can tell time, but it doesn't draw as much attention. And, perhaps most importantly, it only costs $150, that's a full $100 less than the Surge. If you want to go even simpler, there are devices like the $50 Misfit Flash that count steps, but pretty much stay out of the way otherwise. On the other hand, if you're looking for a serious running watch complete with GPS and heart rate monitoring, there's a pile of options from companies like Garmin. The Vivoactive, for example, has most of the same basic features as the Surge at the same price point, with better battery life and more athlete-friendly data logging. While the Forerunner series, like the surprisingly affordable Forerunner 15 (pictured above), delivers best-in-class GPS tracking and detailed tools for runners. (Oh, it also doubles as an activity tracker during your down time.) Here's the thing about the Surge: I kind of ended up liking it. It does a ton of different things, some of them quite well. It's a serviceable running watch, a good activity tracker and a surprisingly robust sleep monitor. The problem is: I just don't want to wear it. When I'm out for a run, its mild bulk and severe black design are a non-issue. When I'm trying to sleep or going to the office, it's a different story. The Surge lacks the subtlety of its relatives like the Flex and the fashion-minded detailing of something like the Jawbone Up. Which means it's really best suited as a running watch rather than an all-day activity tracker.

However, at $250, there are more robust options for runners out there. Timex, Polar, Garmin and TomTom all make devices that more carefully cater to athletes. These running watches have fast, highly accurate GPS radios and connect to chest straps that offer far better heart rate monitoring than a wrist-worn LED. They also have advanced features for tracking progress toward goals, running intervals and coaching you through training programs.

Now, that doesn't mean the Surge doesn't have a niche. There is a market out there for activity trackers that double as GPS watches (and not the other way around). If you're a casual, fair-weather runner, a dedicated running watch might be overkill. And if you're willing to sacrifice some style and comfort in the name of best-in-class step counting and sleep tracking, then the Surge's shortcomings aren't dealbreakers. It's certainly not for everyone, but if you were intrigued by Microsoft's Band only to be turned off by its poor ergonomic design, then the Surge is worth considering.