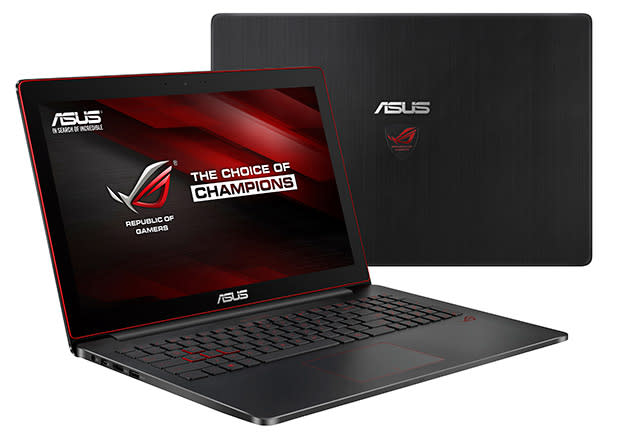 NVIDIA has officially launched the GTX 960M, and a number of manufacturers have revealed new, thin gaming laptops the video card was designed for at the same time. One of those laptops is the ASUS Republic of Gamers (ROG) G501, which measures 0.81 inch in depth and weighs 4.54 pounds. The GTX 960M card inside it can deliver "sharp, vivid visuals, high-quality textures and smooth framerates in the most demanding games," at least according to ASUS. In addition to the video card, you can find a quad-core Intel Core i7 processor, 4GB of GDDR5 RAM and a 512GB SSD under the hood, encased in a typical ROG brushed-metal body with red accents.

The device comes pre-installed with Windows 8.1 and has a 15.6-inch 4K/UHD display, three USB 3.0 ports and an Intel Thunderbolt connection. Plus, it uses the company's dual-fan cooling system for super slim laptops called ASUS Hyper Cool Technology. It will set you back $1,999 when it becomes available in April. If you want a gaming laptop right now, though, ASUS is also re-releasing a couple of older models equipped with NVIDIA's new graphics cards today.

First is the lower-end version of the G751 called the G751JL, which comes with the new GTX 965M graphics card instead of the GTX 980M/970M, like you can find inside the former. It costs $1,399, or $100 cheaper than the previous model's cheapest unit. Finally, the company is updating its GL551 laptops with the GTX 960M cards to release two versions that cost $1,099 and $1,299, depending on their SSDs. All these laptops are (or will be, in G501's case) available in various retail outlets, but make sure to check out the ASUS G-Series website first for more info and a list of stores that where you can find them.

In this article: asus, GamingLaptop, gtx960, intelcorei7, nvidia, RepublicOfGamers, rogg501
All products recommended by Engadget are selected by our editorial team, independent of our parent company. Some of our stories include affiliate links. If you buy something through one of these links, we may earn an affiliate commission.