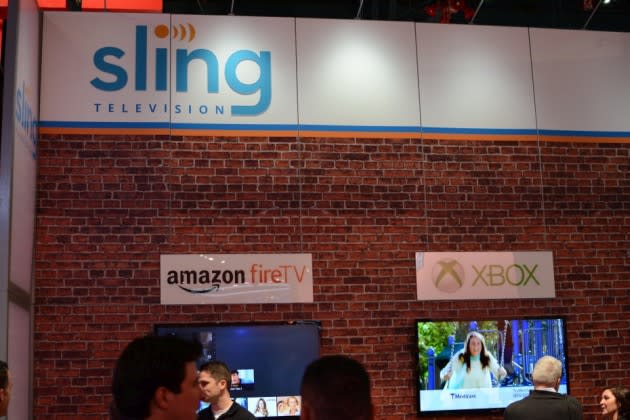 From the start, Microsoft intended for the Xbox One to be at the center of both games and TV watching. With today's launch of Sling TV on the game console, it can bring those two parts together properly for gamers in the US. With standard cable, the Xbox One relies on its HDMI passthrough and IR blasters (apps for FiOS and Time Warner Cable are either missing channels or have no live TV at all) to make sure you get everything, but with Sling, it's designed from the ground up for internet delivery so there's nothing missing. Its launch on Xbox is just in time, too -- PlayStation's Vue TV service is coming soon and rumors indicate Apple will have something similar later this year.

The streaming service's $20 base package -- that already featured ESPN, CNN, TNT and others -- has made key additions lately like AMC and IFC. Expanding from there, if you're willing to spend extra there's a growing selection of sports, kids, movies or news channels to choose from. Sling TV is already on big screens via Roku, Fire TV or Apple TV (AirPlay), so the question with Xbox is if the two can make each other better. We haven't tried the app out yet, but a quick walkthrough video from Major Nelson reveals it's similar to what we saw on other platforms and at CES, with gesture and voice control available via Kinect.

As we noted in our preview, we'd still like to see DVR-style features available across all of the channels Sling TV offers, and that hasn't changed. It's also still a bundle, so a la carte-only shoppers will want to look elsewhere. So who is Sling TV right for? When a regular cable or satellite TV package is just too expensive or more of a commitment than you'd like to make, it's is a convenient way to get access. If you already have an Xbox One, quickly transitioning from TV to gaming (and back) doesn't get much easier than this, and current owners can even get a free month (up from the usual 7 day trial) to find out if the future of TV is through an app instead of a separate box.

In this article: app, hdpostcross, InternetTv, iptv, microsoft, sling, SlingTV, streaming, video, XboxOne
All products recommended by Engadget are selected by our editorial team, independent of our parent company. Some of our stories include affiliate links. If you buy something through one of these links, we may earn an affiliate commission.