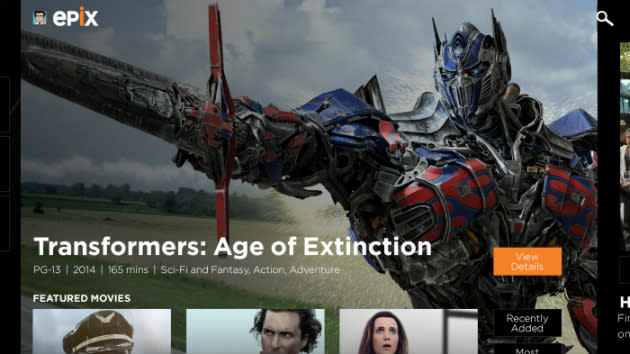 Epix is now on Xbox One. That sounds simple enough, but now try saying it five times in a row, as fast as you can. Yeah, that's what we thought. It might be difficult to say, but it's definitely true: Epix, the movie and TV streaming app from Paramount, Lionsgate, MGM and Viacom, is out today on Xbox One. Epix specializes in movies, concerts and comedy specials, and it's available from most cable companies in the US. It's already out on Xbox 360, PlayStation 3, PlayStation 4, Roku, Android and iOS devices, among others. Epix promised its app would show up on Microsoft's newest console all the way back in March 2014, and almost exactly one year later, here we are. It's sort of like HBO Go on the PS4, but not as many people were waiting for it.

In this article: epix, hdpostcross, microsoft, streaming, xbox, XboxOne
All products recommended by Engadget are selected by our editorial team, independent of our parent company. Some of our stories include affiliate links. If you buy something through one of these links, we may earn an affiliate commission.