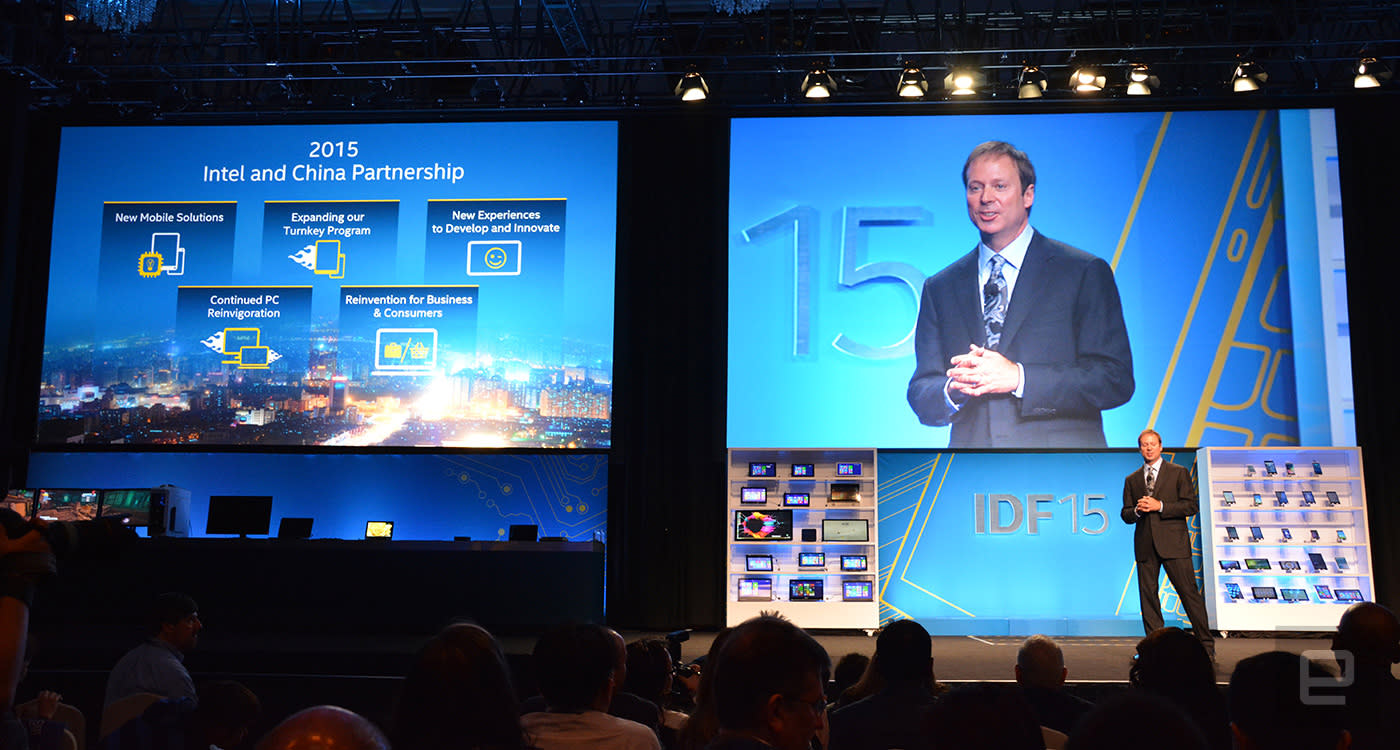 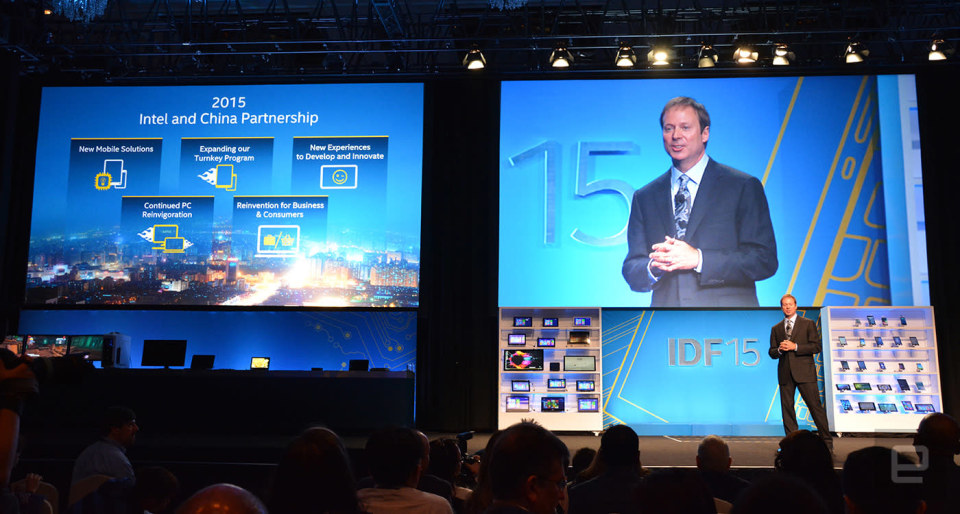 "China is the number one market with connected products."

That was how Intel's Senior Vice President Kirk Skaugen kicked off his keynote at IDF in Shenzhen, citing China's staggering 30 percent share of worldwide connected-device purchases in 2014. The country gobbled up 40 percent of the 46 million Intel-powered tablets shipped globally. Not bad, but 46 million is hardly anything compared to the 420.7 million smartphones shipped in China alone in the same year -- only a tiny percentage of which packed an Intel chip. Most others relied on Qualcomm, MediaTek and Samsung. Intel's smartphone market share is so small that it never dared to share the stats; it could be as low as 2.81 percent in the Android space, according to benchmark specialist AnTuTu.

This isn't something that Intel can fix overnight, but with the launch of its Atom x3 "SoFIA" chips, it's hoping to narrow the gap this year. Atom x3 is actually Intel's first family of chips with an integrated modem, which offers the advantage of improved power efficiency as well as reduced space and costs. It's still going to be a hard sell, though, especially given that the LTE flavor of Atom x3 won't ship until the second half of this year. But at least Intel's found a cunning strategy to stay relevant: partnering with Chinese chip designers Rockchip and Spreadtrum to leverage their connections with local device manufacturers. In other words, these two companies get to offer Intel-powered designs to their clients. A selection of budget tablets in a Hong Kong mall, many of which are powered by Intel's Bay Trail processor.

We won't judge you if you're not familiar with Rockchip and Spreadtrum. Both firms only dabble in the lowest-end smartphone, tablet and TV stick markets. The places that are packed with KIRFs and brands you've never heard of. On the Chinese retail site Taobao, we managed to find a Rockchip-powered 9.7-inch Android tablet that cost just 390 yuan, or about $63.

There's plenty of reason to worry that these cheap devices will tarnish Intel's brand.

Now, this is obviously a case of "you get what you pay for." Ugly or copycat designs, rough seams, scratched metal parts, laggy software, you name it. Not to mention the lack of Google services. Nicole Scott from Mobile Geeks said what many of us were thinking in her post-IDF piece: "I have never seen a Rockchip product that I thought was of good quality." There's plenty of reason to worry that these cheap devices will tarnish Intel's brand. Skaugen isn't terribly concerned, however. "In the last year, we've seen a dramatic improvement in the overall quality in craftsmanship that's come out of Shenzhen," the exec defended. He also points out how the likes of General Motors and Volkswagen have prospered by engaging in China early with local partners.

"When you're here early and you're helping," he said, "I think you would rather be in the position that those companies are in. And quality does get better over time, but you do have to transfer some of your knowledge on how to build even higher-quality products."

In this case, "transfer" is just a pretty way of saying "selling reference designs." Intel does so through its turnkey program, in which vendors can either buy some parts from a list of recommended suppliers, or simply slap their own brand onto Intel's complete reference devices. Going the latter route can get them to market in just six to eight weeks. Such speed is critical in the super competitive entry-level market. According to Intel, last year 30 ODMs made 350 devices based on its reference designs, and those shipped to 50 countries. Rockchip, Spreadtrum, MediaTek and Qualcomm also have their own turnkey solutions, with MediaTek pretty much pioneering this business model in its copycat feature phone days. Intel's clear advantage over the competition lies within its x86-64 architecture (so both Android and full-on Windows are compatible), RealSense depth camera technology and wireless power know-how. The chip giant also claims to offer higher reliability, with customers seeing a 20 percent lower return rate with devices based on its reference designs. At IDF, Skaugen even got Tao He, the president of Chinese device maker Bluebank, to openly praise how much better Intel's reference designs and tech support are.

"If I must complain, Intel's turnkey solution has greatly lowered the entry barrier, making it very easy to design devices," He joked in front of the already amused crowd.

Bluebank is just one of the many Chinese ODMs that are already offering Atom x3-powered devices to potential clients. On the stage, He showed off a 4.5-inch smartphone that will retail for less than $40 (He also mentioned a 4-inch version for about $30), a 5-inch phone with a metallic frame for around $50 and a 7-inch (8mm-thick) tablet with voice calling for just $55. The audience wowed at the tablet.

In addition to Bluebank and its four aforementioned devices, Intel has enlisted 13 other ODMs to commit to 44 more Atom x3 designs this year. And that's on top of Rockchip's 10 ODMs that will use the 3G-R variant (3G, quad-core) of the chip. While this doesn't necessarily reflect the eventual number of consumer models (and some of those designs could have already been sold with other chipsets), it's still a good start; though the 4G-enabled Atom x3 needs to arrive as soon as possible. Atom x3-based tablets at an electronics expo in Hong Kong.

It's all good and well that Intel sees great potential in the entry-level market, but for its new mobile chip to succeed, it must teach its partners -- especially on Rockchip's side -- to respect intellectual property. Both Intel and Rockchip desperately need more quality "hero" devices to boost brand perception. But with Intel-powered knockoffs floating around, it'll be hard to convince other big names to join the party. In the mainstream mobile market, Intel's only got ASUS and occasionally Lenovo on its side.

Even with the potential for intellectual property scuffles, Intel has clearly made the right move by partnering with Rockchip. After all, we are talking about a Chinese company that's working with Google on a system-on-chip module for Project Ara. The company obviously has growing global clout. Intel may be late to the integrated-modem game, but with Rockchip's connections plus growing street cred, it could be on track to catch up with the competition, especially in China where even Qualcomm stumbled recently.

"We want to build long-term partnerships with China," Skaugen said. "This is our 30th anniversary in China. I think some of these partners are the people that will build Intel's brand for the next 30 years. And if you look at companies like Apple or HP that started in the garage, let's not forget what the first PCs looked like. And decades later, I'm glad I have those partnerships."

In this article: atom x3, bluebank, china, featured, features, idf 2015, idf2015, intel, interview, kirk skaugen, mobilepostcross, phone, rockchip, smartphone, sofia, spectrum, tablet, turnkey
All products recommended by Engadget are selected by our editorial team, independent of our parent company. Some of our stories include affiliate links. If you buy something through one of these links, we may earn an affiliate commission.