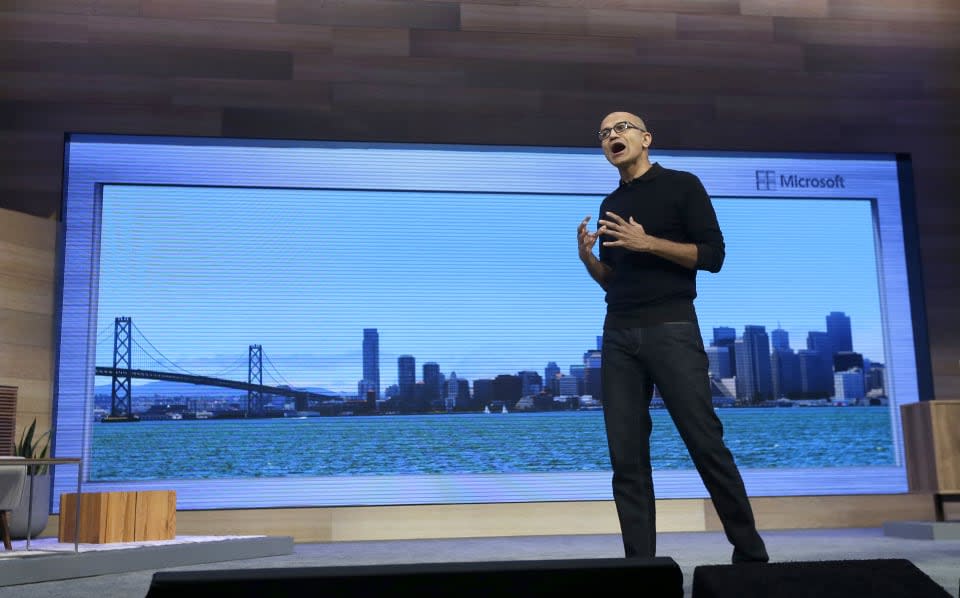 Referencing former Microsoft CEO Steve Ballmer's infamous "developers!" chant is practically a cliché nowadays, but it felt like the silent refrain throughout the company's entire Build conference this week. In the run-up to Windows 10, Microsoft wants developers. It needs developers. And it will do whatever it takes to get them -- even going so far as to allow devs to recompile their Android and iOS apps without much fuss. None of this seemed possible from Microsoft years ago, when simply owning the dominant desktop platform was enough. But now with mobile devices and the cloud in play, Microsoft needs to evolve. And by doing so, it's also making Windows 10 a far more exciting upgrade than Windows 8 ever hoped to be.

Microsoft's been talking up the idea of Windows 10 as a platform since announcing it back in September. But it wasn't until the company revealed it was also going to be a free upgrade for existing Windows 7 and 8 users (for the first year), that it truly hit home how different Windows 10 would be. Microsoft is now prioritizing getting as many people as possible on a single Windows platform more than the revenues it would get from selling access to it.

Throughout the Build conference, one thing became clear: Microsoft is no longer just reacting to the competition. Windows 8 was notable for unifying desktops and mobile devices, but it also felt like a desperate attempt to prove that it could do touch interfaces too. Windows 10, with its hooks into Azure Cloud services, better support across a variety of devices and the promise of freaking holograms with HoloLens, finally puts Microsoft back into a leadership role. That's a sentiment echoed by several Microsoft staffers I talked to (though they wouldn't admit it on the record). And that could be the key to Windows 10's success.

All of the apps Several years after Windows 8's launch, I can only think of a handful of truly compelling apps. Many developers didn't want to devote time to the platform when they would be much better off building something for iOS and Android. And, aside from the vague promise of easy porting to Windows Phones, Microsoft never really gave developers a compelling case to jump ship.

Windows 10 is a completely different story. Microsoft is basically opening the floodgates to apps from pretty much every major platform. Got an iOS or Android app? You can easily recompile it and plug it into the Windows Store. Microsoft's even making room for web apps and older Win32 desktop software. The goal is to populate the Windows Store with plenty of compelling apps -- it doesn't matter how it was originally made. Microsoft's also making it easier to build Windows 10 apps by releasing coding tools for OS X and Linux. And the icing on the cake for developers: Once you've got a Windows app, you can make it "Universal" so that it runs across phones, tablets and even the Xbox without much effort.

The truly astounding thing? Basically everything I wrote in that last paragraph would have been impossible at Microsoft a few years ago. By removing much of the friction involved in making Windows apps, Microsoft has shifted the mentality for developers from "Why should I build for Windows?" to "Heck, why not?" Windows 10 has all of the cross-device promise that Windows 8 had, except it's potentially far more useful. The new Continuum feature, for example, reshapes the OS' interface depending on how you're using it. If you've got a Windows 10 tablet, it'll be much more touch-friendly. If you've got a traditional laptop or desktop, it'll resemble Windows 7 with a revamped desktop Start menu. And for convertible devices like the Surface Pro 3, your experience will change depending on its orientation.

Herein lies the promise for Universal Windows Apps -- developers only have to manage one codebase to bring an app to multiple devices. During one of Build's keynotes, Microsoft reps showed off how USA Today managed to bring its desktop Windows 10 app to tablets and even the Xbox One, where it only shows you news videos. (Because nobody expects you to read articles on your Xbox.)

At Build, Microsoft also showed off how a Windows 10 phone can spit out a decent desktop interface. That won't replace your primary computer, but if you're working on the go, or can't afford anything beyond a phone, it's a feature that could fundamentally change the way we compute.

It's no wonder Microsoft laid out an ambitious goal to bring Windows 10 to a billion devices in a few years. It has to think big. By doing so, it will finally be able to court the developers who've ignored Windows 8 so far.

On their own, some of Windows 10's features might be enough reason to upgrade. Microsoft's Cortana virtual assistant is steadily improving with every new early Windows 10 build. It'll also be the first such assistant on a desktop OS -- Apple's Siri came first, but it's still only on iOS devices.

Then there's Edge, Microsoft's slick new browser, which could make you forget about the dark days of Internet Explorer. It's speedy, minimalist and also supports Cortana. And once again Microsoft is also working hard to court developers by making it easy for them to bring over their existing browser extensions. I also got a taste of Windows 10's Xbox One streaming feature, which performed surprisingly well, with no discernible lag or stutter. It's definitely something I'm looking forward to using when my living room TV is occupied.

Excitement about the future We still don't know when and how Microsoft will bring its holographic headset HoloLens to the public, but even at this early point, it's clearly something special. It's light-years beyond Google Glass, which was more of a persistent notification platform than a true augmented reality solution. And it interacts with the physical environment far better than the VR platforms we've seen. Most impressively, HoloLens isn't some far-off satellite project for Microsoft -- it's part of the company's vision of a unified Windows 10 platform. On top of being powered by the new OS, it can also run any Universal Windows app. With HoloLens, Microsoft has something that could keep developers excited for the next few years.

I had the chance to sit through a HoloLens programming session, and while the experience didn't quite match those demos Microsoft has been promoting -- the field of view was small, and the fit wasn't very good -- it still has the potential to be a significant leap forward in computing. I built a hologram using the Unity game development tool and Visual Studio (with a huge helping hand from Microsoft's reps) and spent about an hour tweaking it. When viewed through HoloLens, my creation's textures were surprisingly clear (I was able to read the text on a crumbled-up ball of paper), but it wasn't truly lifelike.

Sure, it was just a beginner hologram, but it was enough to make me excited for what real developers will be able to do once they get their hands on HoloLens.

Maybe this is reading too much into things, but I noticed a very different feeling in the air after chatting with developers and Microsoft employees over the past few days, when compared to the Windows 8 launch years ago. Back then there was plenty of apprehensiveness around the new touch interface, and a general sense that Microsoft was just rushing to catch up to Apple and Android. Now, that anxiety has been replaced with excitement. And for Microsoft, that's the best possible outcome from its developer conference.

In this article: build2015, microsoft, mobilepostcross, Windows10
All products recommended by Engadget are selected by our editorial team, independent of our parent company. Some of our stories include affiliate links. If you buy something through one of these links, we may earn an affiliate commission.