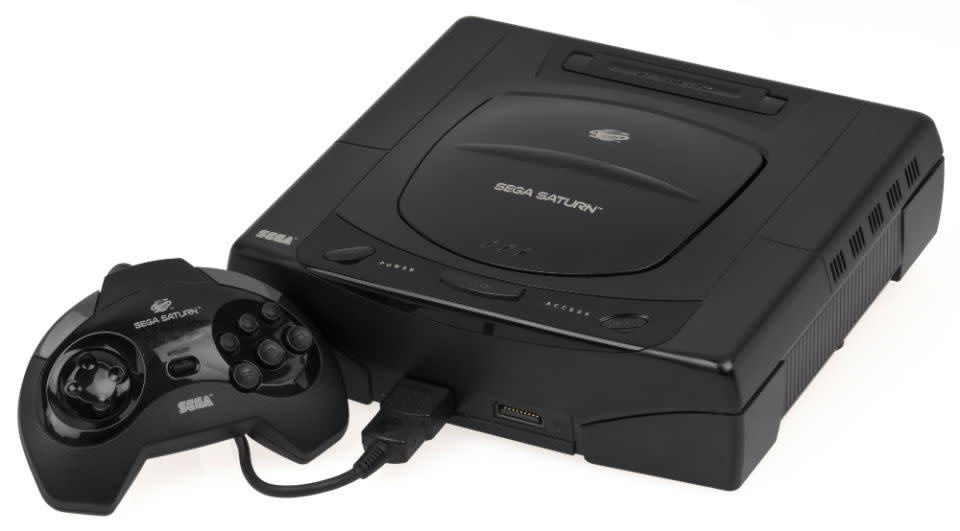 It was 20 years ago today that Sega released the Sega Saturn, the US video game industry's first and only surprise console release. Tom Kalinske, Sega of America's CEO at the time, walked out onstage at E3 and announced to a theater full of game publishers, journalists and store owners that its new console was available right now for a whopping $400. If that seems like an insane business plan, it was; Saturn was so rushed to market that its scant few games didn't even have titles printed on their case's spines. Expensive and difficult to developer for, it was quickly buried by the popularity of Sony's PlayStation. The sad truth is that while the Saturn wasn't a hit here in the US, it actually enjoyed a healthy following in Japan thanks to an abundance of excellent games that only made it out in that region. Here are seven curios for Sega's maligned machine that make it a must for fans of the obscure.

Elevator Action Returns encapsulates what the Sega Saturn did best in Japan: bringing weird-as-hell. arcade-style 2D action into the home. A sequel to Taito's '80s B-list arcade game, Elevator Action Returns turned the series into a zany cross between Starsky & Hutch and G.I. Joe. You pick one of three hair metal-ready heroes with guns to run through colorful stages full of elevators and strange terrorists.

Nanatsu Kaze no Shima Monogatari was born of Enix's tradition for publishing deeply odd games that bucked genre conventions. Mixing the puzzle-solving adventure motifs of '80s PC games like King's Quest with the side-scrolling exploration of console games like Castlevania, Monogatari was like nothing else on any machine at the time. You play as a pudgy, bipedal dragon exploring a series of islands full of freaky old monsters and magic seeds. Monogatari is unusually peaceful and relaxed, a world of beautiful sights largely free of violence typical in other adventures.

Games where you run from left to right, bopping on enemies, have been ubiquitous since Mario rescued Princess Peach, but there was a brief moment in the '90s when they fell out of vogue in favor of 3D games. The Sega Saturn hosted a few truly bizarre side-scrollers like Keio Flying Squadron 2 during that drought. It is the only game to let you run around as an off-brand Playboy bunny collecting gold, hitting monsters with a giant hammer and hanging out with an adorable dragon.

One of the very last games released for Sega Saturn, Final Fight Revenge is a heartbreaker. The much-loved brawling arcade series hadn't had a proper entry since Final Fight 3 on Super Nintendo, but when it finally showed up on Saturn it was as a one-on-one fighting game. It also happened to be terrible. Final Fight Revenge's awfulness isn't without its pleasures, though. The ridiculous polygonal models of awesome characters like wrestling mayor Mike Haggar and Poison, one of gaming's first (purportedly) trans characters, make the game a lovable failure.

For years, this anthology was the only way to play Capcom's lushly animated arcade games based on the famous role-playing game series. While painstakingly accurate ports of those originals were finally brought to PlayStation 3, Xbox 360, PC and Wii U in 2013, the Sega Saturn collection remains impressive for how it translates those arcade games to a markedly less powerful machine. Plus: Playing them with the Saturn controller feels oh so right.

Vanillaware is the studio responsible for some of the most gorgeous, hand-drawn games made in the past 10 years including Odin Sphere and Dragon's Crown. Princess Crown on Sega Saturn is the game that launched the studio, though: a gorgeous role-playing game with enormous, vivid sprite characters conceived by George Kamitani. Many of the ideas in those more recent games -- including an obsession with building character stats with food -- were born in this lovely game.

Congratulations: You are now singing the Bubble Bobble theme song in your head. Made famous by the hallucinatory NES game about bubble-spitting dinosaurs destroying 99 stages of bulbous, tiny wizards and flying, purple whales, the Bubble Bobble series never got the sequel it deserved in the US. (The extremely rare Bubble Bobble 2 on NES and Rainbow Islands don't count.) In Japan, there was Bubble Symphony. A prettier spin on the original's action, Symphony is even more aggressively strange. How strange? The final boss is named Hyper Drunk. Seriously.

In this article: bubblesymphony, dungeonsanddragonscollection, elevatoractionreturns, finalfightrevenge, hdpostcross, keioflyingsquadron, NanatsuKazenoShimaMonogatari, princesscrown, saturn, sega, sega saturn, segasaturn
All products recommended by Engadget are selected by our editorial team, independent of our parent company. Some of our stories include affiliate links. If you buy something through one of these links, we may earn an affiliate commission.