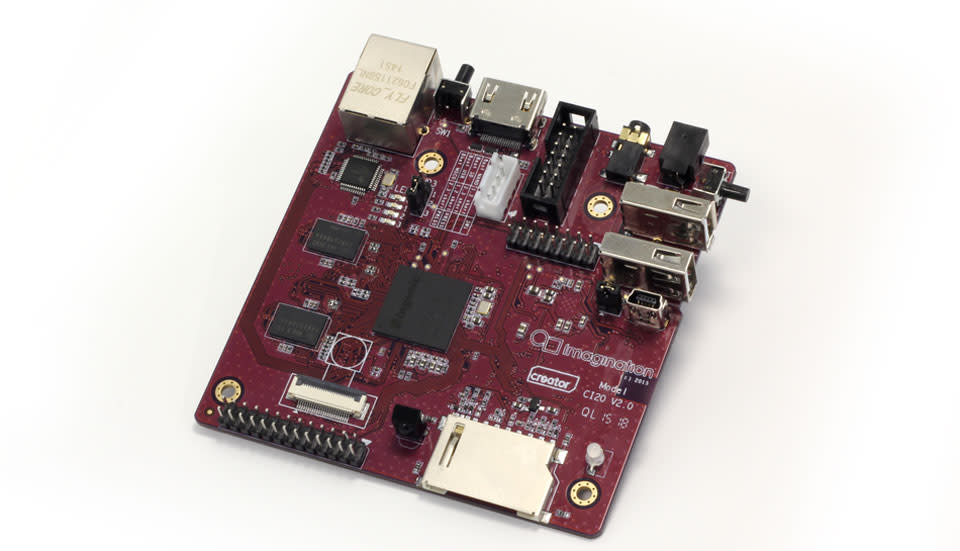 It was just under a year ago that Imagination Technologies launched its "Raspberry Pi on steroids," the MIPS Creator CI20. Now that Maker Faire is upon us, the company has taken the opportunity to present its second-generation hardware, the, uh, new MIPS Creator CI20. The most obvious change is skin-deep, since the v2.0 board now comes with a smaller, squarer body that's designed to improve wireless performance.

Spec-wise, the hardware remains unchanged, with the same MIPS/PowerVR chip and graphics combo, 1GB RAM, 8GB on-board storage, as well as an SD-card slot, USB and Ethernet-out ports. The version of Android 4.4 that the board runs has been tweaked, however, to address persistent issues with sound over HDMI and Ethernet connectivity. Meanwhile, if you're using Debian Linux 3.18, you'll find a new binary is available with improvements in the memory and graphics departments. You'll also now have access to FlowCloud, the company's plug-and-play Internet of Things system, for instance letting you build simple home automation applications, like a temperature-controlled fan.

If we're being generous, the original board wasn't the most graceful piece of hardware, and the company has made the squared-off sequel much easier to mount in a case. Speaking of which, Imagination is also offering the plans for a 3D-printed outer shell free of charge, and will allow makers to play with them as they see fit.

You may be wondering why Imagination, a British chip designer, is trying to muscle in on the Raspberry Pi's turf at all. It's a little complicated, but the point is that it's all down to the ARM chip that is located at the heart of the Pi's board. ARM and Imagination are both fabless chip outfits, located an hour's drive away from each other in the UK. The former makes the CPUs that you'll find in a big proportion of the world's smartphones and tablets, while Imagination makes the PowerVR graphics hardware that's often tucked beside.

Unfortunately, like the Williams sisters when they're not playing doubles tennis, each one would much rather be top dog on their own, thank you very much. ARM, for instance, produces Mali graphics hardware that can push its down-the-road frenemy out into the cold. Imagination's response, naturally, was to pick up a rival mobile CPUI maker in the hope of avoiding such an attack. Of course, given ARM's huge popularity, Imagination is hoping to get itself lodged into the hearts and minds of the next generation -- opening the MIPS architecture to academic institutions and hobbyists. Perhaps the hope is that, years down the line, more people will be familiar with Imagination's gear than ARMs, and the tide will turn in their favor.

Right now, that means that Imagination is handing out these pretty sweet boards for not much money at all. If you're in the Bay Area and turn up to the company's stand at Maker Faire, you'll be able to pick one up for a $10 discount. If not, then you'll have to wait in line and make your pre-order like everyone else.