Twitter proved its priorities are screwed up with just 280 characters

Twitter removing the 140 character limit from DMs in July 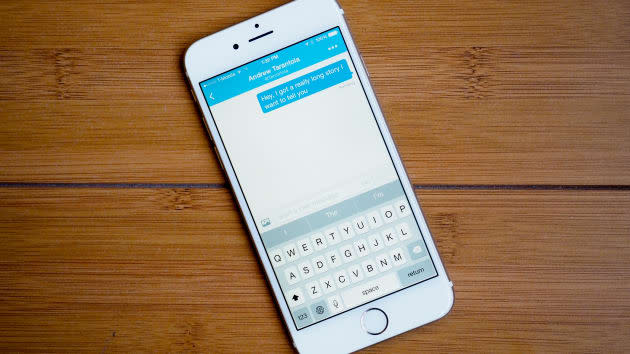 Twitter really wants you to start using Twitter DMs to privately chat with your friends. Of course, when you're chatting with folks, a 140 character limit means you have to span your long messages over multiple posts which sort of kills the flow of a story. But, starting sometime in July, you won't have to worry about that because the company is removing the 140 character limit in DMs. So go ahead, leave long meandering messages to your friends via DMs. The news was dropped by Product Manager for Direct Messages, Sachin Agarwal on the Twitter developer channel. As for regular public facing Twitter, it will still be limited to 140 characters.

In this article: 140characters, DM, Twitter
All products recommended by Engadget are selected by our editorial team, independent of our parent company. Some of our stories include affiliate links. If you buy something through one of these links, we may earn an affiliate commission.