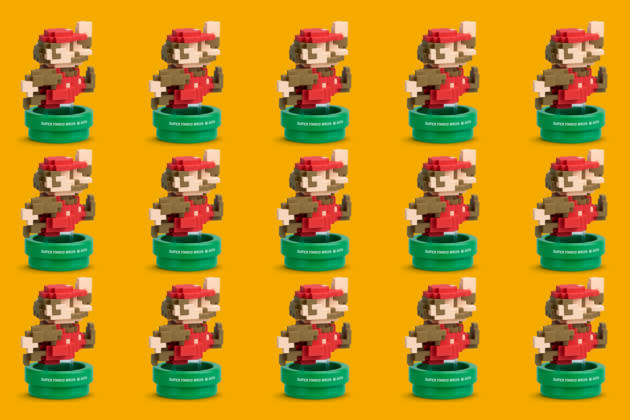 It should come as no surprise, given Nintendo's propensity for creating Mario games, that the company can't stop making Amiibo based on its most-famous character. Since the NFC toy line was introduced last November, we've already seen five: Super Smash Bros. Mario, Mario Party Mario, Gold Mario, Silver Mario and Dr. Mario. Thanks to an email from Nintendo Spain (first spotted by Nintendo Inquirer), it appears there's going to be a sixth: 8-bit Mario. The newsletter included an image of the retro-styled figurine along with a shot of an unannounced Animal Crossing collection that'll feature at least four characters from the series.

Following the newsletter leak, a higher-quality image was found on Nintendo of Europe's servers. It's since been removed, but was of course saved and re-uploaded by an enterprising fan. We expect to hear more about the new Amiibo -- and maybe some actual games -- at Nintendo's E3 live stream tomorrow evening. In this article: 8-bit, amiibo, animal crossing, e3, figurine, mario, nfc, nintendo, toy
All products recommended by Engadget are selected by our editorial team, independent of our parent company. Some of our stories include affiliate links. If you buy something through one of these links, we may earn an affiliate commission.