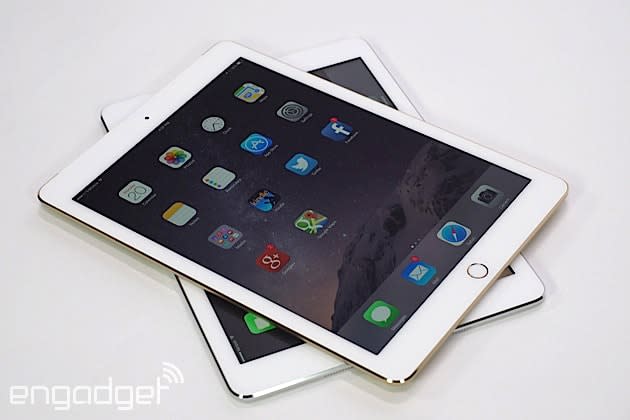 Whenever someone talks about the 12.9-inch iPad, we pull the same nervous, hopeful gaze that we do when Half-life 2: Episode Three is mentioned. Deep down, we know in our hearts that neither are very likely to happen, but no matter what, they'll never be able to take the hope from us. Now, iOS expert and friend of the site Steve Troughton-Smith believes he's found a nugget of proof that the iPad "Pro" exists. Oh, put your tongues in your cheek and grab a handful of salt, because we're venturing into tangent territory, here.

While digging deep into the details of iOS 9 preview, the developer has found a new larger on-screen keyboard. One that's sufficiently big to scale beyond the 9.7-inches you'll find on Apple's full-size tablet, at the very least. The biggest tweak is to add a new row of symbols above the keycaps, as well as the inclusion of tab and caps lock keys on the left hand side. As 9to5Mac points out, the overall effect is to reduce the number of different screens you need to switch through for characters from three to two, since all of the symbols now fit in the second pane. Now, as we probably need to remind you, this is a tiny piece of software from a preview build and doesn't guarantee anything -- but we can't stop you from lighting a candle in the tallest tower of your heart.

Update: Troughton-Smith has also unearthed code in the iOS 9 preview that hints that such a device would have a screen resolution of 2048 x 1536, as reported by 9to5Mac.

In this article: apple, Hint, iOS9, iPad, iPadPro, Keyboard, Rumor, StevenTroughton-Smith, Tablet
All products recommended by Engadget are selected by our editorial team, independent of our parent company. Some of our stories include affiliate links. If you buy something through one of these links, we may earn an affiliate commission.