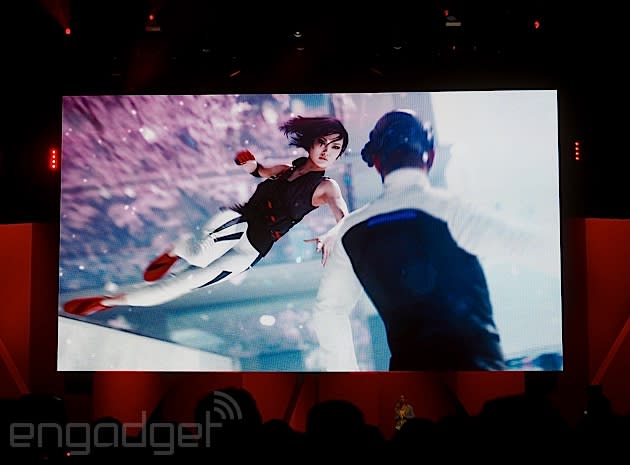 Do you recall that Mirror's Edge reboot we reported on at last year's E3, and the E3 before that? Yeah, EA is finally providing a close look at the long-in-the-making parkour title Mirror's Edge Catalyst, which is slated to arrive February 23rd, 2016, on the PS4, Xbox One and PC. As hinted early on, you're witnessing Faith's origins as she becomes an underground hero in the corporate-dominated City of Glass. This is an open-world story with no arbitrary levels and loading times -- your main goal is simply to navigate the urban landscape and fight the oppressive regime of business mastermind Gabriel Kruger. There are a few new activities, too, such as A-to-B races and the as-yet-undescribed "Dash" mode. The new Mirror's Edge will be playable on the show floor, and you can be sure that we'll give it a spin.

In this article: DICE, e3, e32015, EA, gaming, hdpostcross, mirrorsedge, MirrorsEdge2, mirrorsedgecatalyst, video, videogames
All products recommended by Engadget are selected by our editorial team, independent of our parent company. Some of our stories include affiliate links. If you buy something through one of these links, we may earn an affiliate commission.