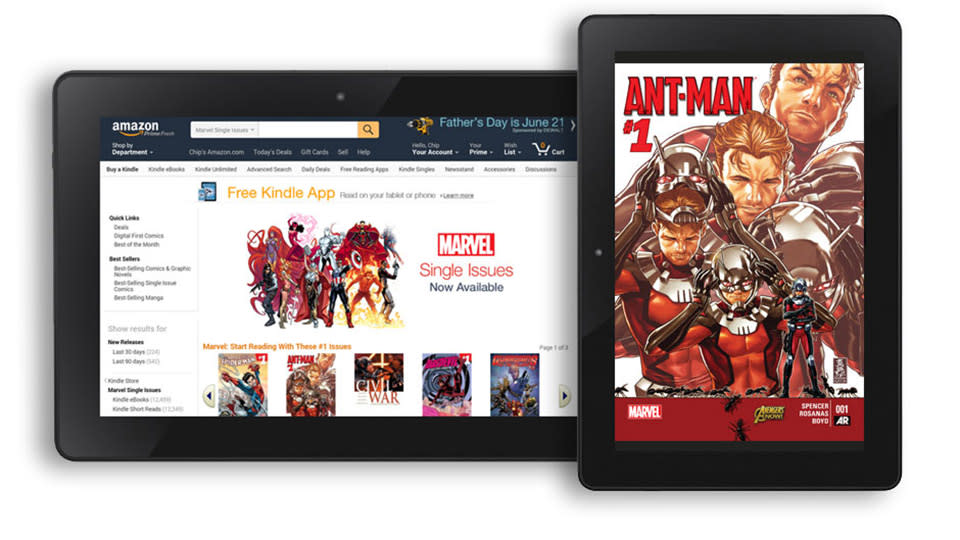 Amazon has a virtual monopoly on digital Marvel comics, but it's just opened up another way to get them. Kindle owners can now purchase single issues through Amazon's store without needing the Comixology app as before. You can still get Marvel comics through Comixology, but of course Amazon acquired it last year, so the money goes to Jeff Bezos either way. All told, you'll be able to purchase up to 12,000 back issues of titles like Guardians of the Galaxy, Daredevil and The Amazing Spiderman at the Kindle Store. Moreover, all titles will be available the same day they arrive in regular stores.

The only other place to find the e-comics is via Marvel's own $10 monthly subscription service, but it only stocks issues more than six months old. Given the popularity of Marvel titles and Amazon's lockdown on distribution, you may not be shocked to hear that Comixology is the top-grossing book app on iOS. On Google Play, meanwhile, it's merely the top-grossing comic app. Hopefully Amazon will remember that with great power, comes... eh, probably not.

Update: The folks at Scribd reminded us that over 10,000 comics are included in its $9/month plan, including plenty of titles from Marvel. So, that's one more place to get them.

In this article: amazon, Comic books, Comics, comixology, e-reader, Kindle, Kindle Fire, Marvel
All products recommended by Engadget are selected by our editorial team, independent of our parent company. Some of our stories include affiliate links. If you buy something through one of these links, we may earn an affiliate commission.