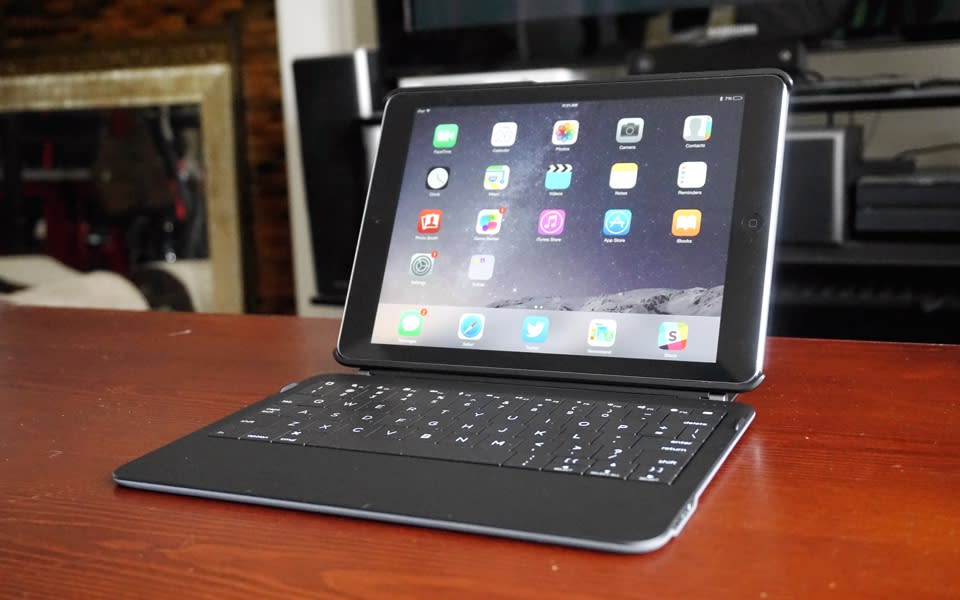 It's hard to expect much from Typo, a company that was co-founded by Ryan Seacrest and whose legal tango with BlackBerry has forced it to stop selling phone keyboards. But with its new iPad keyboard, Typo has at least proven it's worth keeping an eye on. For $189, you get a Bluetooth keyboard that actually feels like a decent laptop keyboard, as well as a cover to protect your iPad. There's no shortage of iPad keyboards on the market, but Typo's offering might be compelling to anyone who wants a premium laptop-like experience with their iPad. The only problem? It's far too expensive for what you get.

Typo's keyboard is made up of two main components: a case that fits around your iPad Air or iPad Air 2 (there's also one for the iPad Mini), and a keyboard unit. A magnetic latch hooks the two pieces together, and the kickstand on the iPad case stabilizes everything. They keyboard portion sports a comfortable soft plastic wrist rest and a matte bottom finish, while the iPad cover is made of tougher plastic, offering a decent amount of protection. Once everything's put together, the Typo cover ends up making your iPad look like an ultra-thin laptop -- at the expense of a bit more thickness and weight.

I didn't have any trouble pairing the Typo keyboard with my iPad Air over Bluetooth, and, most importantly, reconnecting to the Typo after turning it off took just a few seconds. That's been a source of frustration for me with other Bluetooth keyboards. The keyboard itself is reminiscent of Microsoft's Surface Type Cover (which is a bit curious after Typo's legal brawl with BlackBerry). The keys have a surprising amount of depth to them when pressed down, especially since the Typo is so thin. For the most part, it felt similar to typing on a mid-range chiclet laptop keyboard. Typo is rechargeable via USB, and it lasted me several days with intermittent usage.

When it came to typing, I saw around 80 to 90 percent of my typical touch-typing speed. That's pretty similar to what I've seen from most other tablet keyboards, though it wasn't nearly as comfortable as Microsoft's larger Surface Pro 3 keyboard. Typo also takes some getting used to: It's not truly full-sized, and plenty of lesser-used keys (like the colon/semi-colon key) have been shifted around to make up for the lack of space. The main thing that slowed me down with the Typo was figuring out where many of those keys were moved to. Like many laptop keyboards today, Typo also includes several device-specific buttons along its top row, which also houses the traditional function keys. The very first of these keys on Typo replicates the iPad's home button, and there are also keys for launching spotlight search, contacts, calendar and media controls. I also grew to enjoy having Siri instantly accessible on the F5 key, which was ever so slightly faster than holding down the home button.

I was able to type this entire article on the Typo keyboard in multiple orientations -- on a desk, on a park bench and while sitting on my couch -- without much fuss. Given its kickstand, Typo is best used on solid surfaces, but I was also surprised by how functional it was on my lap (as long as you keep your legs straight). Typo's biggest issue is that the magnetic connection between the keyboard and case is incredibly weak. Simply holding up the iPad on its own is enough to disconnect the keyboard. My iPad screen also fell hard on my legs several times when I tried to readjust Typo (the metal kickstand was especially painful).

As useful as it is for typing, the Typo cover ends up being pretty cumbersome if you just want to read or play games on your iPad. It adds a noticeable amount of weight to the svelte iPad Air and Air 2, and the protruding kickstand hinge made the tablet harder to hold. I ended up just yanking the Typo cover off when I wanted to browse Twitter, read digital comics and do other typical iPad-y things. The company was clearly more focused on delivering a decent typing experience than anything else. For the most part, Typo is going up against Logitech's iPad keyboards, which offer similarly great typing and Bluetooth connectivity for almost half the price (Logitech's latest Ultrathin keyboard is currently retailing for $100 or less). And if you don't need a wireless keyboard, you can save a bit more and get Logitech's wired keyboard for $60. While Typo's offering feels a tad more premium than the competition, it's definitely not enough of a difference to justify that high price.

The biggest issue for Typo? It's betting pretty much everything on its iPad keyboards. And while that's a potentially lucrative market, especially since iOS 9 will make iPads more PC-like, Typo's keyboards are simply too expensive to compete with widely available competitors like Logitech. There are many people who might want an iPad keyboard, but I'd imagine there are fewer who would pay around half the price of their iPad for the privilege of physical keys.

In this article: engadgetirl, iPad, iPadkeyboards, keyboards, mobilepostcross, Typo, TypoforiPadAir, video
All products recommended by Engadget are selected by our editorial team, independent of our parent company. Some of our stories include affiliate links. If you buy something through one of these links, we may earn an affiliate commission.