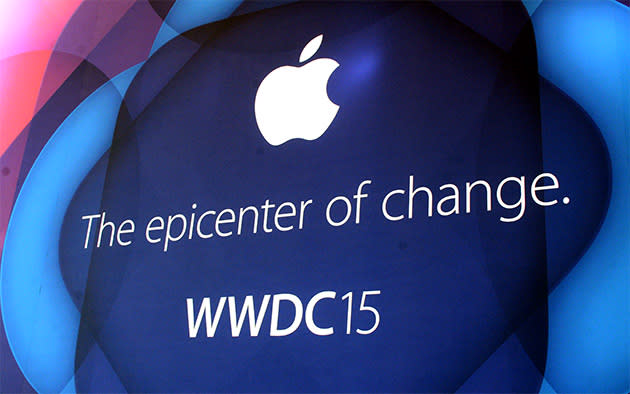 It wouldn't be a software development conference without some software, so please be upstanding as we welcome iOS 9 to the world. There are two themes to this year's update: a Snow Leopard-style series of behind-the-scenes performance tweaks as well as a raft of new "intelligent features." The first is pretty understandable, while the second looks to bring some of Google Now's much-trumpeted smarts to your phone and tablet. That means that, at least on paper, Siri will now be smart enough to predict the sort of information that you'll want before you start looking for it.

For instance, if you get a call but don't know the number, iOS 9 will hunt through your emails just in case that information is stored in a signature somewhere. Your phone will also be smart enough to predict your routine and offer up traffic alerts, should there be an obstruction on your regular route. Should you only listen to audiobooks on your morning drive to work, the phone will know to resume playing A Farewell To Arms on your way home. It's a similar situation at the gym, so when you plug in your headphones on the treadmill, your exercise playlist will be offered up.

Remember when Tim Cook said that privacy was a fundamental right? Apple is hoping to beat Google at its own game by providing these "intelligent features" without the sort of data mining it accuses its rival of doing. According to Craig Federighi, all of the processing for these new offerings takes place on your device. Should the phone struggle with a request and the information needs to be handed off to an Apple server, the company pledges that it'll all be anonymized.

Some of the other improvements to iOS 9 include:

The company has been able to bring the sort of split-screen multitasking some of you will have found on Samsung's larger Android devices to the latest and greatest iPad. Now, users can see and run two apps at the same time, as well as watch video picture-in-picture while you scroll through your emails or hang around on Twitter.

If you've ever audibly sighed at the sight of your iPad demanding several gigabytes to update your system, you'll be happy to see that the company has (kinda) fixed the problem. Now, rather than needing almost 5GB of free space, Apple has changed the way its system upgrades work to mean that you now just need 1.3GB of space to get iOS 9 onto your device.

Apple has also wheeled out a new battery saver mode that'll extend the life of your device by up to three hours by cutting power-hungry, but nonessential systems.

If you simply must have Apple's latest and greatest, then you can sign up to a public beta that'll kick off in July. Otherwise, the operating system will land for everyone as a free upgrade in the fall, presumably alongside some new smartphones.

In this article: Apple, iOS, iOS9, WWDC2015
All products recommended by Engadget are selected by our editorial team, independent of our parent company. Some of our stories include affiliate links. If you buy something through one of these links, we may earn an affiliate commission.