Jets and mannequin heads: Just another day at Dyson's campus

The Wirecutter's best deals: a soundbar, Bluetooth headphones and more! 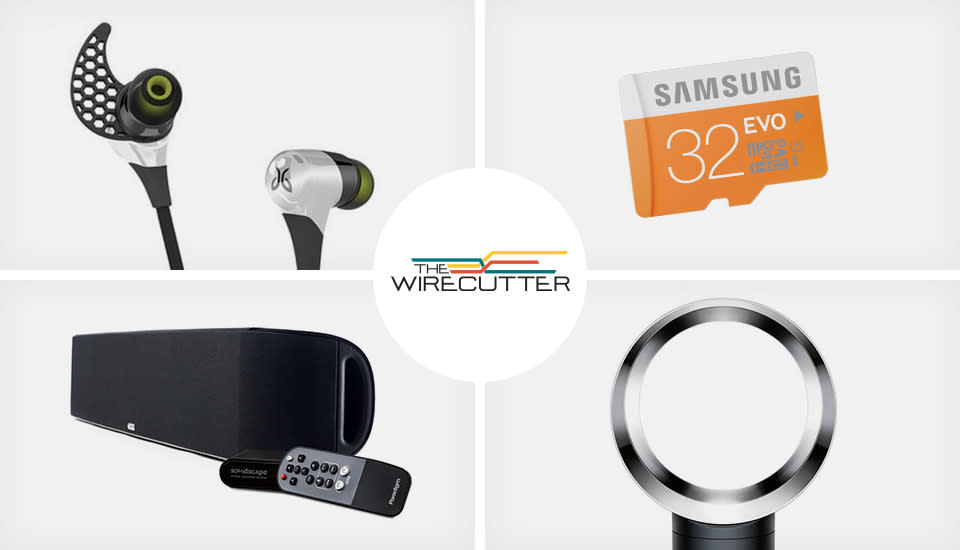 This deal is a match for the memory card's lowest price ever on Amazon. It's a repeat of an earlier deal we posted in May. It hasn't gone above $17 since then.

The Samsung 32GB EVO is our pick for the best microSD card. Kimber Streams wrote, "The 32GB Samsung EVO is the best microSD card for most people's smartphones and tablets because of its comparatively speedy 4KB random read and write speeds, snappy sequential read and write speeds, and 10-year limited warranty. It's inexpensive, made by a reliable manufacturer, and the fastest you can get without spending a lot more money." We've posted this soundbar before at $1,275 but this is the first time it's dropped to $1200. Stock does seem a little limited, with Electronics Expo (via Amazon) having 9 left, but other third party sellers that also have Prime shipping matched the $1,200 price.

The Paradigm SHIFT Soundscape Soundbar is our best soundbar. Chris Heinonen said, "When you're paying this much for a soundbar, you want it to sound great, which the Paradigm Soundscape does. It bested almost all its competitors in our testing thanks to a more-accurate lower-midrange that provides some extra richness and warmth to movies and music. It throws a very large, involving soundstage and has clear dialogue with its center channel." He also noted that the wireless adapter included works with any subwoofer, a rarity in this age of proprietary protocols. This is the lowest price for these headphones ever offered by Amazon. They've been steadily decreasing in price since the first of the year. This deal is only available on the Storm White variety of the headphones.

The Jaybird Bluebuds X are the runner-up in our best exercise headphones article. Lauren Dragan said, "If you want to cut the cord and go for Bluetooth, look no further than the Jaybird BlueBuds X. Bass sounds great, they're light and don't chafe, and they pack a lifetime sweatproof warranty." She added, "They were just barely edged out as our top pick." This is a fantastic price and significantly below any price we've seen on new models of the AM06. Since it's through a Dyson authorized dealer and service center, it comes with a 6 month warranty through Dyson and 6 months through ABC Vacuum's warehouse. However, our top pick in the best fan has a 5 year warranty and Dyson themselves offer a 2 year warranty, so you'll have to consider whether that's a deal breaker for you.

The Dyson AM06 is what we considered the best combo desk and room fan in our best fan article. Seamus Bellamy said, "During our testing, the $250 AM06 moved more air than any other desk fan. On its highest settings, this 4-pound 5.8 by 12 by 19.7-inch fan could put out as much air as some of the room fans we tested—and it often worked as well as they did, despite being much smaller."

In this article: BladelessFan, deals, dyson, dysonM06, jaybird, jaybirdbluebudsx, m06, microsd, ParadigmShift, paradigmshiftsoundscape, partner, samsung, soundbar, soundscape, syndicated, thewirecutter, wirecutter
All products recommended by Engadget are selected by our editorial team, independent of our parent company. Some of our stories include affiliate links. If you buy something through one of these links, we may earn an affiliate commission.