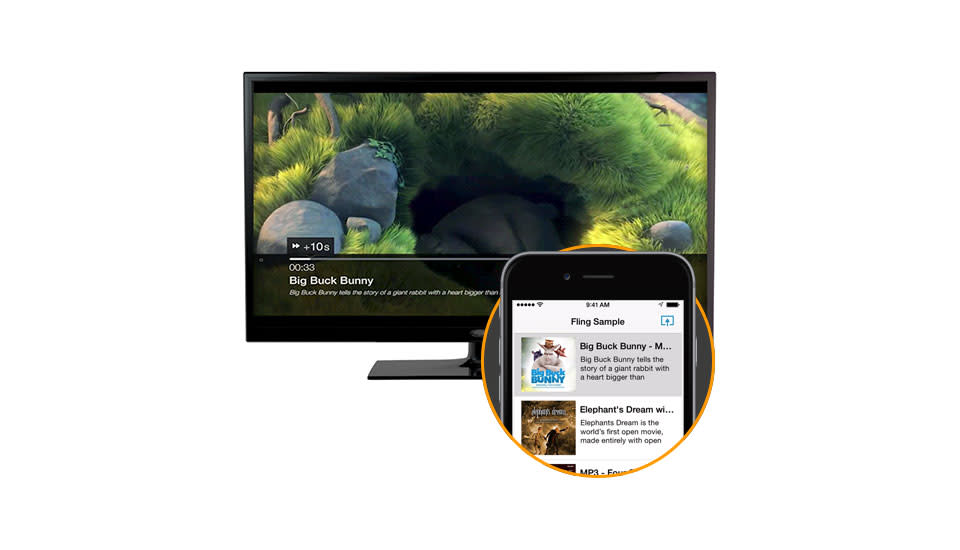 If you've been hoping for an AirPlay or Cast-like tool to beam content to your Amazon streaming gadgets, you'll soon be in luck. The company revealed its Fling feature this week, a tool that will allow developers to include a way to control media from a mobile device on your Fire TV. Right now, the software will let you send video, audio and still images from an Android or iOS device to the set-top box (or dongle, we'd surmise) for viewing. Devs can also employ "two-way communication" between the Fire TV and a phone or tablet to "engaging second screen experiences."

The company released an SDK so eager app makers can get started, and Karaoke Party and Rivet Radio are among the first selections to employ the tech. Rather than building the tool into it's OS like Apple and Google, Amazon is allowing app developers to add in Fling as they wish. Amazon's mobile devices run a version Google's operating system after all, and some folks who own its streaming gear probably also own an iOS or Android device. That being said, it'll be interesting to see if the likes of Netflix, Hulu and others will decide to opt in.

In this article: amazon, amazonfling, app, fling, hdpostcross, mobilepostcross, sdk, software, tv
All products recommended by Engadget are selected by our editorial team, independent of our parent company. Some of our stories include affiliate links. If you buy something through one of these links, we may earn an affiliate commission.