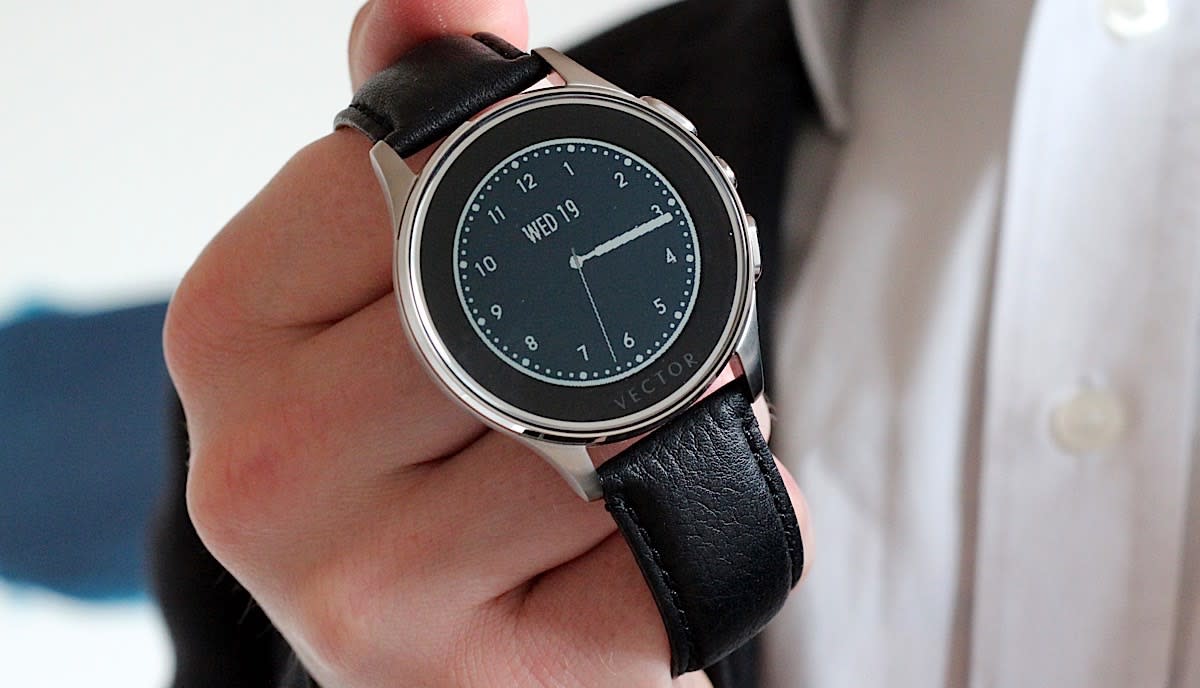 There are plenty of smartwatches, but the majority of them scream, "I'm a smartwatch," from every pore. Squared-off devices like the ZenWatch and Apple Watch still have a faint whiff of the pocket protector, while rounder units like the Moto 360 and G Watch R have had to bulk up to accommodate their internals. That's why Vector is such an interesting company: With its new Luna watch (£299, or about $466), it put an emphasis on design and a 30-day battery life over functionality. That may not sound like a smart proposition to some, but this combination of good looks and bare-bones features actually makes a lot of sense. There's something of the SkyMall catalog that's hard to shake when you take your first look at the Luna. That's the round-faced version of its watch, although you can also get a rectangular model called the Meridian, if that's more your thing. With its wide, brushed chrome case and gen-u-ine leather strap, the Luna looks like the sort of product that's exclusively sold in the air over international waters. You'd find it sitting beside priapic timepieces with names you've never seen before or since, like the "Sweegen Chronograf" and "Tag Hour's Steeve MacQueen Racer." There's a whiff of a "statement" watch with its large, 44mm face and masculine styling that you just wouldn't get from a similarly priced Casio.

One common complaint about smartwatches is that the technology that's crammed inside forces them to be on the larger side. I have wrists like tree trunks, so this isn't a problem for me, but it can certainly be alienating to those with smaller forearms. That's why I called upon Gadgette Editor-in-Chief Holly Brockwell to try the Luna. She wasn't deterred by the Vector's heft and size, saying that it was "surprisingly comfortable" and that "wrist-wise, it fitted fine." In addition, it's thin enough that it rarely gets caught under your shirt cuff, making it ideal as a smartwatch you could wear to a formal event without jeers.

Aside from just looking pretty, however, Vector pledged that its smartwatch would last for up to 30 days on a single charge. That's a compelling alternative to many other devices that demand a return to the wall socket once, twice or even several times each week. I had imagined that my never-ending supply of emails, messages and calls would rinse the Luna's battery well before the month was out. I received the device on July 28th and it died on August 29th -- meaning I got more than 30 days out of this thing with near-constant use. If I have one complaint, it's that there's no easy way to see the battery life on the device, but I guess you're not meant to worry about it, so I didn't. It may be running a custom operating system, but nearly all of its cues come from Pebble's first-generation smartwatch. The up/down navigation, vibrating when you get an email, being able to answer or dismiss calls from your wrist -- it's all the same. There are some neat refinements on that concept, like the fact that you'll get a small buzz when you receive an email -- but it will only display it on the screen if it detects you've moved your wrist up to your face. With the pre-release hardware and software, it doesn't always work perfectly and you need to give it an exaggerated flick of the wrist, but it's a neat idea, well executed. The display is similarly Pebble-ish, but while that device had a 168 x 144 resolution, the Luna has a more readable 240 x 240.

As well as giving you the opening line of your emails, text messages and call information, the Luna has a variety of functions that are baked in as separate faces. For instance, push the down button and you'll be able to select a stopwatch, stock ticker, BBC News alerts and an activity tracker, with more coming in the future. Those selections, as well as spare faces, can all be selected via the companion app for your iOS, Android and Windows Phone devices. If I'm honest, I don't care too much for these added features, since I mostly use wearables to a) tell the time; b) see if I need to instantly respond to an email or text message; and c) get physical alerts for certain home-control apps. In which case, the Luna handles all of these tasks and manages to look good while it does it. I've tested a lot of smartwatches, but for regular use almost always find myself backsliding toward the original Pebble or my Polar V800 fitness tracker. Neither of these is particularly pretty and, honestly, they look and feel unashamedly geeky. I've never been convinced by the Pebble Steel/Time Steel either, since that square-circle case makes it feel more like a graphing calculator than a sophisticated timepiece. That's one of the reasons that I'm drawn to the Vector, because it's got most of the things I need from a smartwatch, but dressed up in a Tom Ford suit. Okay, it's probably more "Thom Fjørd" than Tom Ford, but the principle remains. If you want a half-decent smartwatch in a stylish and attractive body, check one of these out.

In this article: engadgetirl, hands-on, VectorLuna, VectorWatch
All products recommended by Engadget are selected by our editorial team, independent of our parent company. Some of our stories include affiliate links. If you buy something through one of these links, we may earn an affiliate commission.