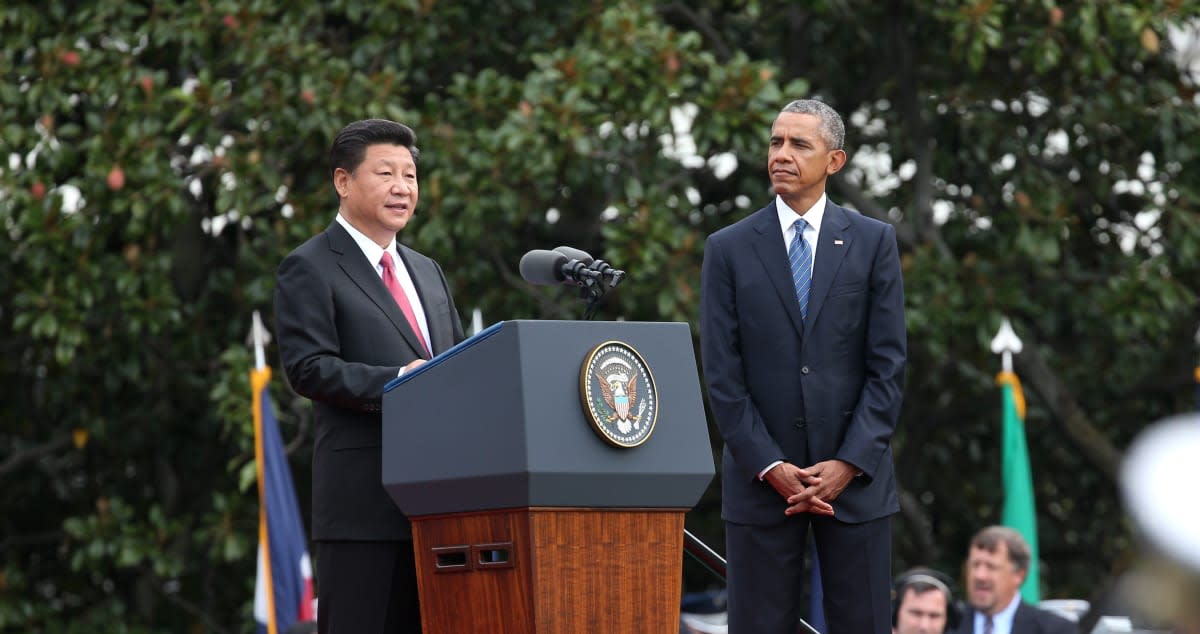 Ahead of a state dinner in Washington D.C. attended by a number of notable tech CEOs (Tim Cook, Mark Zuckerberg and Satya Nadella, to name a few), President Obama and Chinese President Xi Jinping announced an unprecedented agreement on the topic of hacking. After a number of recent hacks on commercial and government targets in the US were blamed on Chinese hackers it was expected the two might try to reach a deal, and according to Obama, they now have an understanding.

I raised once again our very serious concerns about growing cyber-threats to American companies and American citizens. I indicated that it has to stop. The United States government does not engage in cyber economic espionage for commercial gain. And today, I can announce that our two countries have reached a common understanding on the way forward.

We've agreed that neither the U.S. or the Chinese government will conduct or knowingly support cyber-enabled theft of intellectual property, including trade secrets or other confidential business information for commercial advantage. In addition, we'll work together, and with other nations, to promote international rules of the road for appropriate conduct in cyberspace.

So this is progress. But I have to insist that our work is not yet done. I believe we can expand our cooperation in this area, even as the United States will continue to use all of the tools at our disposal to protect American companies, citizens and interests.

As defined, it wouldn't cover a hacking attack like one against the Office of Personnel Management -- and that officials have blamed China for -- but would extend to ones that hit Google and others in 2010, or Anthem earlier this year. There's no word on how the agreement would (or could) be enforced, or if it will further slow the pace of recent attacks. Responding to questions, Obama described the deal as "progress," and mentioned the threat of sanctions on individuals or entities behind attacks. While we wait to see if these rules have any impact, Obama indicated that the US and China, along with other world powers, will continue working to develop an architecture to govern cyberwarfare that is enforceable and clear.

Q Thank you, Mr. President. President Obama and President Xi, I'd like to talk to you about cyber. If I am an American business and I'm being hacked by Chinese pirates who are trying to steal my intellectual property, what firm assurances can you give us today that things are going to get better, and when?

President Obama, are you satisfied enough about the steps that China is taking to hold off on imposing any new sanctions to this end? Or what do you still need to see?
And, President Xi, could we expect prosecutions of Chinese people and organizations who have hacked American businesses? And if the U.S. did sanction anyone in China, would you respond with sanctions?

PRESIDENT OBAMA: I'll take them in order. With respect to cyber, this has been a serious discussion between myself and President Xi since we first met in Sunnylands. And the good news, from my perspective, is, is that in the lead-up to and then finalized during our meetings here today, we have, I think, made significant progress in agreeing to how our law enforcement and investigators are going to work together, how we're going to exchange information, how we are going to go after individuals or entities who are engaging in cyber-crimes or cyber-attacks. And we have jointly affirmed the principle that governments don't engage in cyber-espionage for commercial gain against companies. That all I consider to be progress.
What I've said to President Xi and what I say to the American people is the question now is, are words followed by actions. And we will be watching carefully to make an assessment as to whether progress has been made in this area.

With respect to the various tools that we have to go after those who are attacking our companies or trying to extract trade secrets or data, we have traditional law enforcement tools, but -- as I indicated a while back -- through executive action, I've also instituted the ability to impose sanctions on individuals or entities where we have proof that they've gone after U.S. companies or U.S. persons.

And we did not, at our level, have specific discussions of specific cases. But I did indicate to President Xi that we will apply those and whatever other tools we have in our toolkit to go after cyber criminals, either retrospectively or prospectively. Those are tools generally that are not directed at governments; they are directed at entities or individuals that we can identify. And they're not unique to China. Those are tools that we're going to be using for cyber criminals around the world.

And President Xi, during these discussions, indicated to me that, with 1.3 billion people, he can't guarantee the behavior of every single person on Chinese soil -- which I completely understand. I can't guarantee the actions of every single American. What I can guarantee, though, and what I'm hoping President Xi will show me, is that we are not sponsoring these activities, and that when it comes to our attention that non-governmental entities or individuals are engaging in this stuff, that we take it seriously and we're cooperating to enforce the law.

The last point I'll make on the cyber issue -- because this is a global problem, and because, unlike some of the other areas of international cooperation, the rules in this area are not well developed, I think it's going to very important for the United States and China, working with other nations and the United Nations and other -- and the private sector, to start developing an architecture to govern behavior in cyberspace that is enforceable and clear.

It doesn't mean that we're going it prevent every cyber-crime, but it does start to serve as a template whereby countries know what the rules are, they're held accountable, and we're able to jointly go after non-state actors in this area.

PRESIDENT XI: (As interpreted.) Madam reporter has raised the cybersecurity issue. Indeed, at current, for the international community and for China and the United States, this is an issue all attach great importance to. With President Obama and I have on many occasions -- and this is a long history -- have exchange of views on this. I think it's fair to say we've reached a lot of consensus on cybersecurity, including some new consensus.

Overall, the United States is the strongest country in terms of cyber strength. China is the world's biggest cyber country in terms of the number of Web users. We have more than 600 million of netizens. Our two sides should cooperate because cooperation will benefit both, and confrontation will lead to losses on both sides. We are entirely able to carry out government department and expert levels of dialogue and exchanges to strengthen our cooperation in many respects and turn the cybersecurity between the two countries into a new growth source, rather than a point of confrontation between the two sides.

China strongly opposes and combats the theft of commercial secrets and other kinds of hacking attacks. The U.S. side, if has concerns in this respect, we can, through the exiting channels, express those concerns. The Chinese side will take seriously the U.S. provision of any information. Now, we have already, and in the future, we will still, through the law enforcement authorities, maintain communication and coordination on this matter, and appropriately address them.

So, all in all, we have broad, common interest in the field of the cyber. But we need to strengthen cooperation and avoid leading to confrontation. And nor should we politicize this issue. During my current visit, I think it's fair to say that the two sides, concerning combatting cyber-crimes, have reached a lot of consensus. Going forward, we need to, at an early date, reach further agreement on them and further put them on the ground.

[Image credit: Xinhua News Agency/Getty Images]
In this article: China, CyberWarfare, espionage, hacking, PresidentObama, US, XiJinping
All products recommended by Engadget are selected by our editorial team, independent of our parent company. Some of our stories include affiliate links. If you buy something through one of these links, we may earn an affiliate commission.