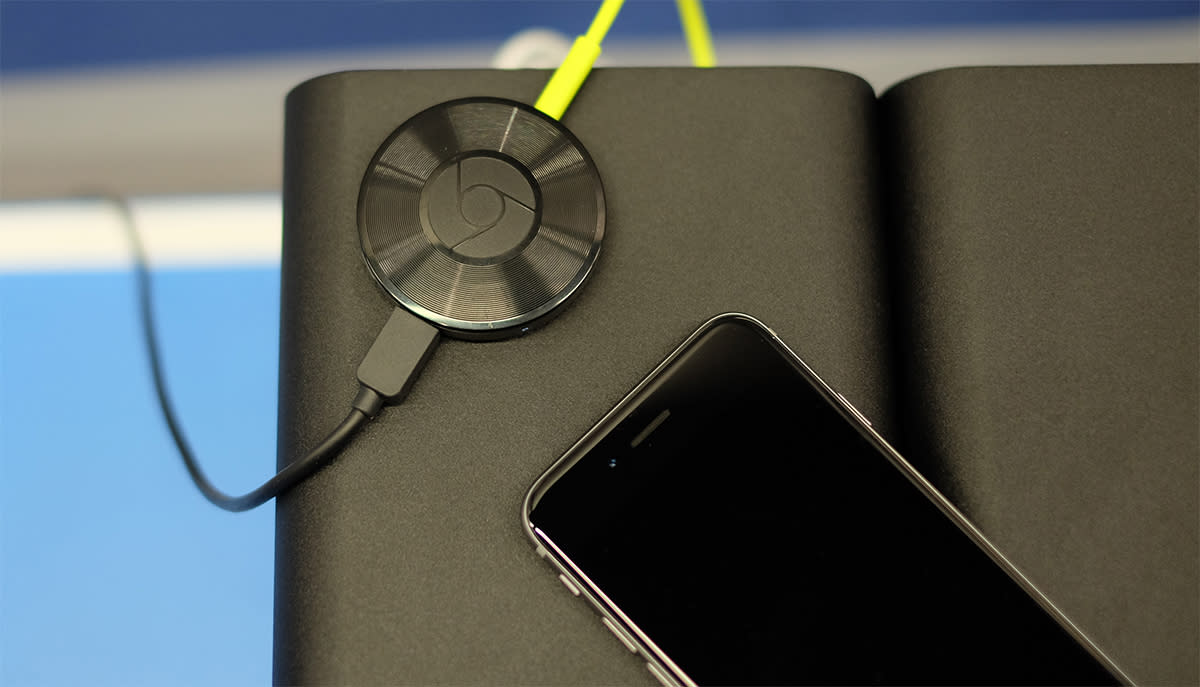 The Chromecast Audio is pretty smart. Here's the elevator pitch: You plug the little hockey puck in the image above into a power outlet, and then connect it to your speakers using the provided 3.5mm-to-3.5mm cable, or a third-party 3.5mm-to-optical cable or the equivalent RCA converter. Then, Google says, you've got a smart speaker. I checked that claim out for myself at the company's event, and it does what it says, but I still don't know if it does it well.

You can cast music from a number of sources including Google Play Music and -- at last -- Spotify. The former also acts as a good casting option for those that like to keep their music files local rather than streaming. While the regular Chromecast got a new discovery app today, the new Audio version behaves more like the Chromecast of old, which is a lot like an open version of Apple's AirPlay. It'll support your phone, tablet or laptop -- essentially anything that runs Chrome or Android -- and over the coming months multi-room support will roll out.

So... Sound quality. "Okay" tells you everything I know at this point. Problem is, I listened to all three of the setups, but I listened to them in the middle of a vast hall filled with people who weren't about to be quiet and let me work out how good the audio quality was. So, instead of an actual opinion, I can tell you that I've heard Tove Styrke's "Borderline" seven times and there wasn't a stutter, glitch or streaming issue at all. Also I am still somehow not tired of that song. Using WiFi streaming is a much better option than Bluetooth, both in quality and range, but the parts inside the Chromecast Audio are going to make all the difference. I asked a Google spokesperson if they could give me any more details on sound quality, and they told me the Chromecast has a "world-class DAC" (Digital to Analog Converter), but refused to disclose what company makes the part. That makes me nervous. Video processing in the original Chromecast is pretty ropey. It won't be long until someone pulls this apart and tells us how good the DAC is, but without that information, and without even a basic subjective listening test, we'll have to wait for a verdict on the audio quality for now.

Sonos, which is probably the leading name in home audio streaming, sells almost the exact same product as the Chromecast Audio. It's called the Sonos Connect, and it basically turns your regular speakers into Sonos speakers. It costs $350. The Chromecast Audio costs $35, and it lets you use the apps you want to use to control your music. If Google's got the audio quality even at an adequate level, then it's difficult to see this not catching on.

In this article: Chromecast, ChromecastAudio, google, hands-on, mobilepostcross, nexus2015
All products recommended by Engadget are selected by our editorial team, independent of our parent company. Some of our stories include affiliate links. If you buy something through one of these links, we may earn an affiliate commission.