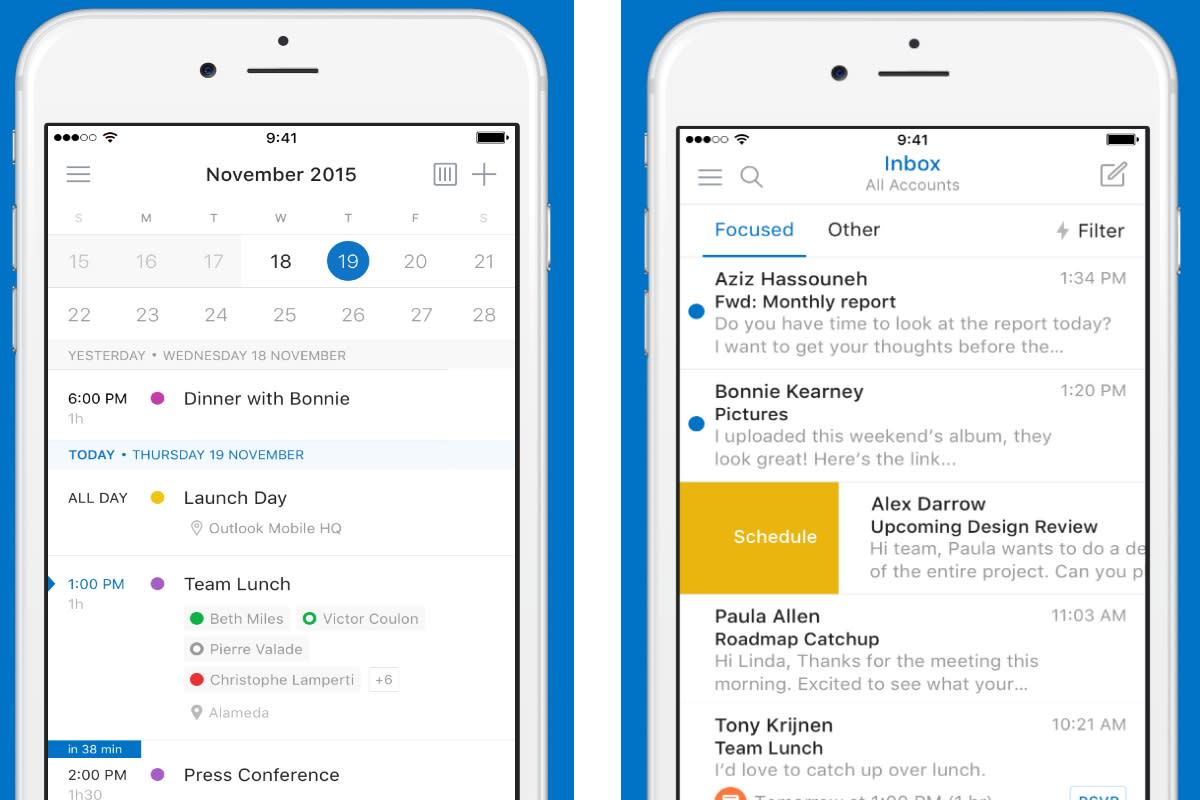 Microsoft's Outlook mobile apps got a solid revamp last year, thanks to its acquisition of the email app Acompli. Now, it's ready to integrate the spoils of another mobile acquisition: the calendar app Sunrise. The latest versions of the Outlook apps, launching on iOS today and Android in November, feature several design updates that would be familiar to Sunrise users. The calendar portion of the app now has a daily view that puts all of your activities in an easily scrollable list, and event entries now display their relevant information more clearly. On the email side of things, event invites are highlighted in your inbox, and you can even RSVP to them without opening up the message. For most users, these sorts of changes will be subtle experience upgrades, but it's nice to see Microsoft integrate some of the design elements that made people fans of Sunrise. The new app also makes it clear what Microsoft is trying to do with Outlook on mobile: Bring all of the best design decisions from disparate apps into a single location. (One email app to rule them all, yadda yadda...)

Eventually, Microsoft plans to bring over more elements from Sunrise into Outlook, including more integration with other apps and easier event creation. That also means that Outlook will eventually replace the Sunrise app, according to Microsoft's Outlook VP Javier Soltero (who came over as CEO of Acompli). That's the sort of news that Sunrise fans were probably dreading following Microsoft's acquisition of the app, but Soltero says Microsoft won't sunset Sunrise (hah) until all of its key features are in Outlook. Really, though, the move makes sense: Outlook on the desktop focused on being your single app for your mail, calendar and contacts, so why not do the same with Outlook on mobile?

It also looks like consumers are buying into Microsoft's new Outlook mobile strategy. It now has more than 30 million people using Outlook on iOS and Android once a month, making for more than 1.2 billion monthly sessions. Additionally, around 20 percent of those people have more than one account linked to Outlook, which is a sign that they may be relying on it for both work and personal email.

"There are a lot of tools to satisfy different scenarios of collaboration, but the one truly horizontal, ubiquitous and fundamentally open scenario is email," Soltero said in an interview. "I joke, probably too often, that I can send you an email from my super awesome Surface Pro 4 using Outlook 2016 ... and you can be reading it in Pine, if you're a Unix nerd like I was, or maybe Eudora, if you want to go really old school... That flexibility, along with the structural flexibility of email as a communications tool, is both the reason why it's still popular and still around, but also the reason why we hate it. The way you fix that ... you don't make it a tools conversations, you really dig deep into what exactly is not great about email.... And it turns out email would be better if people would use it better."

Despite many tools that advertise themselves as email killers, like Microsoft-owned Yammer and the popular collaboration tool Slack, email isn't really going anywhere anytime soon. So the best option for tech companies now is to figure out new ways to help people wrangle their email better -- not by piling on features, but by focusing on usability. That's what Microsoft is focusing on now with its new Outlook apps, and so far, it seems to be paying off.

In this article: microsoft, MicrosoftOffice, mobilepostcross, Office
All products recommended by Engadget are selected by our editorial team, independent of our parent company. Some of our stories include affiliate links. If you buy something through one of these links, we may earn an affiliate commission.