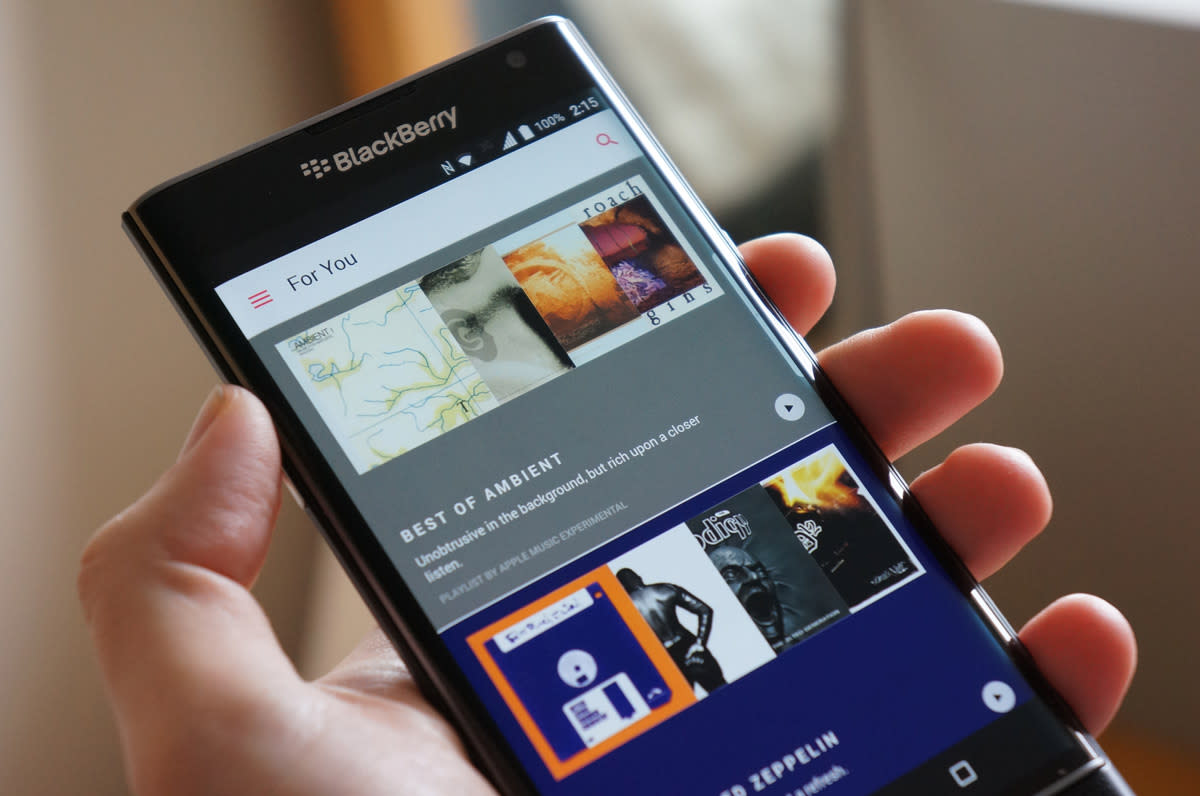 Ponder the photo you see above for a moment. Yes, that's Apple Music running on a BlackBerry phone powered by Android -- products from three mobile rivals working in harmony. The very concept of this would have been outlandish just a year ago, let alone a few years earlier when these companies were at each other's throats. This is the best sign yet that some of the walls in mobile tech are finally tumbling down. Companies are realizing that they sometimes have to play nicely with each other if they want to succeed... and that's good for everyone.

This newfound openness isn't entirely voluntary, of course. BlackBerry is using Android on the Priv because its back is against the wall -- BlackBerry 10 doesn't have enough apps to prevent people from leaving. Microsoft, meanwhile, is writing Android and iOS versions of major apps in part because it missed the boat on mobile. If it wants to get its code on your phone, it can't insist on supporting Windows alone. Even Apple, which is well-known for limiting apps to its own hardware, had to put Apple Music on Android if it wanted to give Spotify a run for its money. Google is one of the few mobile giants to have offered these olive branches to other platforms from the start, but it's still making strange bedfellows to help Android get a foothold in the workplace.

However necessary these moves may be, the very fact that the companies are crossing bridges at all is telling. It shows that they've had a collective change of heart, that they know isolated ecosystems won't necessarily lead to victory. What good is stubborn pride if it still lets the competition walk all over you? While these firms aren't about to hold hands and sing "Kumbaya," they've learned that making peace with the enemy can occasionally grant access to customers that were previously off-limits. It's certainly cheaper than a patent lawsuit, which rarely slows competitors down and offers a poor return on investment. The effects of this kinder and gentler attitude can be dramatic. The Priv is probably the first BlackBerry in years that you can seriously consider if you aren't a die-hard fan, especially if you depend heavily on third-party apps. For me, it's liberating to try a BlackBerry that both packs high-end hardware and can run apps like Instagram without jumping through hoops. Apple Music? You may not be a fan, but the Android version opens doors to both the curious as well as mixed-platform households where Apple's music services weren't previously an option. Microsoft's efforts, meanwhile, are a big deal for just about anyone who uses its apps and services. You don't have to retreat to your Windows PC to finish a report in Word or ask Cortana a question.

I don't expect that this thawing cold war will lead to a Utopia where everything works everywhere. Apple will want you to buy an iPhone to use most of its mobile apps, BlackBerry will jealously protect its hardware keyboards and Microsoft will lavish the most attention on Windows users. And that's fair, even if it isn't ideal. These are businesses that need to make money, after all, and they do that by offering you features that either aren't available elsewhere or work best on their own platforms. You can also make a case that the occasional exclusive adds much-needed variety in a world where the differences between devices can be slight.

With that said, it's good to see that the absolutism of the past has gone away (for now, at least). You're less likely to give up something useful to run a must-have app or pocket some slick-looking hardware. We're all be better off when these companies abandon their walls and let them crumble, rather than constantly trying to trap us inside.

In this article: android, apple, applemusic, blackberry, editorial, google, ios, microsoft, mobilepostcross, priv, windows
All products recommended by Engadget are selected by our editorial team, independent of our parent company. Some of our stories include affiliate links. If you buy something through one of these links, we may earn an affiliate commission.