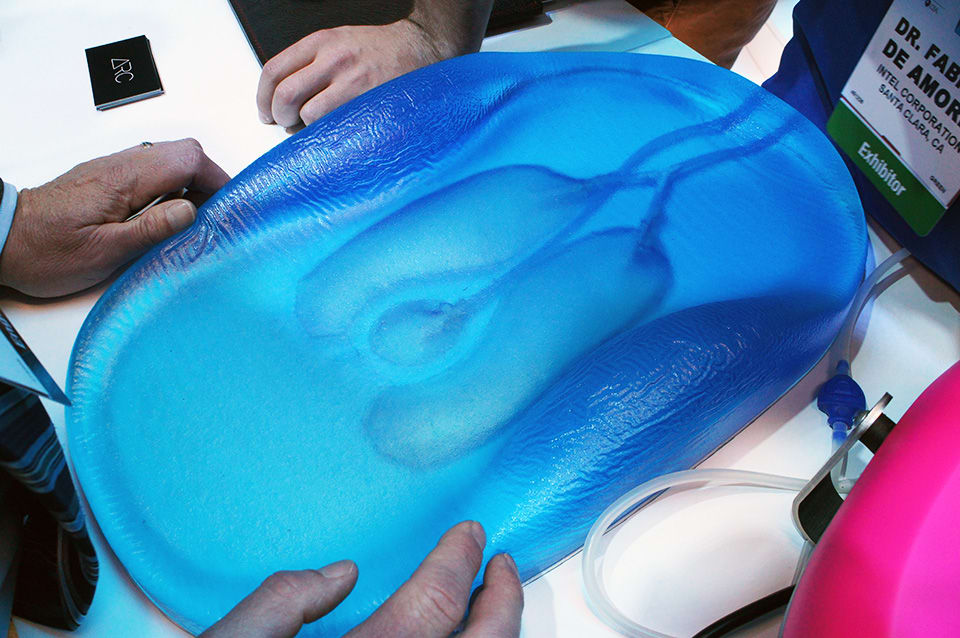 CES 2015 does not lack for connected devices. Lightbulbs, beds, socks... seriously, everything is a connected device at CES. But, let's be honest with ourselves: These are luxury goods for people with disposable income. BabyBe is using Intel's connected-device platform Edison to actually better the lives of people, specifically premature babies and their mothers. The most important component is the "Cradle," a pad embedded with air bladders and heating elements, sheathed in a medically safe polyurethane. It's soft and a little odd-feeling. It's supposed to mimic the density and texture of human skin, but kind of ends up falling into uncanny valley territory. The air sacks inside mimic the heartbeat and chest movement of the mother, who can't hold her fragile, premature child.

The sensors that pass that information to the cradle are in the "turtle," the appropriately named control unit that a mother holds against her chest. It wirelessly transmits data to pneumatic pumps in the base unit that fills and empties the bladders in the cradle rhythmically. That base station can also record that data and play it back at a later date if the mother isn't around to share her heartbeat in real time.

The idea is that the movement actually soothes the child and allows them to heal and develop faster. That could mean one less day in an incubator, which is not just one less day's worth of expensive hospital bills, but one more day of being a complete family. Right now, the device is in trials in Chile, with Germany and Spain next in line. Obviously there's no guarantee that these will find their way into hospitals around the globe, but with Intel's backing (and some major exposure here at CES), BabyBe has a good chance of finding at least some success.

In this article: BabyBe, CES, CES2015, edison, hands-on, intel, medical
All products recommended by Engadget are selected by our editorial team, independent of our parent company. Some of our stories include affiliate links. If you buy something through one of these links, we may earn an affiliate commission.