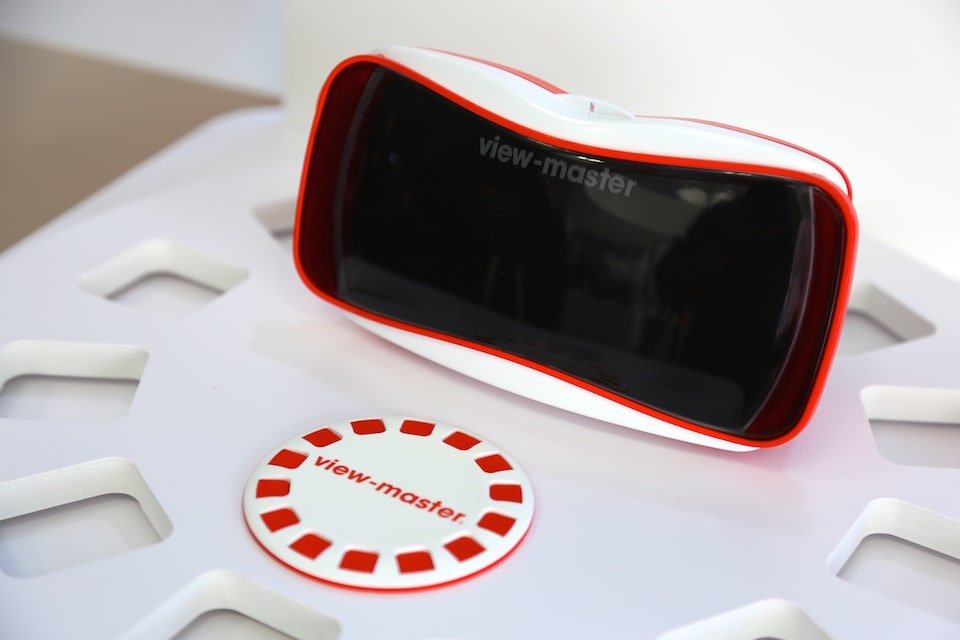 I may not be the best candidate for a virtual reality demo. My glasses always get in the way, and even straight 3D tends to make me dizzy. None-the-less, I had to try the new View-Master. Well, the new View-Master app, at least. Sadly, the plastic viewer itself is still very early in the production cycle, so there wasn't a version ready to accept a phone and do a proper demo. But I was able to slot a Nexus into a Google Cardboard set up (stamped with a red View-Master logo) and get an idea of the experience Mattel is planning for October.

Basically it's Street View in VR. That may seem a little simplistic, but it's accurate. After you fire up the app and hold the viewer to your face you'll be looking at the world through your smartphone camera. In the middle of your field of view you'll see a little white dot. This is your cursor. If you have an "experience reel" you place it on the table in front of you, and putting the dot over the reel will pop up icons that let you choose different experiences or locations. Pull down on the shutter slider and you're transported to a virtual world.

My first stop was San Francisco and I wouldn't be shocked to learn if Mattel simply used Google's Street View imagery. I was dropped on a corner not far from Fisherman's Wharf; A green street car was frozen in the intersection. As I looked around, the scenery whizzing by in a 360-degree blur, I noticed an icon floating in the air that looked quite a bit like a View-Master reel. I looked at, pulled down on the shutter, and up popped a text box giving me some historical details on the bay area landmark. If I turned a little bit further, there was a second icon with some compass like markings. When I selected that I was transported a few blocks to the Wharf proper where there were other contextual icons that told me about the delicious Dungeness crab I could be enjoying if I was actually there, as opposed to New York City where the temperature is a balmy seven degrees (that's Fahrenheit, not Celsius, by the way).

My second destination, the moon, was a little less impressive. The 3D rendering was simplistic, the textures flat and low-res. But it was interesting to be able to look at a spot and pull up an image of Neil Armstrong as he first set foot on the moon.

Since you're holding the viewer to your face your hands and the imagery are stationary, it's not nearly as immersive as an Oculus Rift, but it's certainly fun. It gets pretty close to recreating the experience of looking through a View-Master, and I'm sure kids will be impressed by their ability to simply look at a landmark and learn about it. I, on the other hand, suffered the same fate I always do when I have to remove my glasses to strap on a VR headset -- two minutes in and I was too dizzy to stand still. At least I have until October to get some new contacts.

In this article: cardboard, google, hands-on, mattel, toys, view-master, viewmaster, virtual reality, VR
All products recommended by Engadget are selected by our editorial team, independent of our parent company. Some of our stories include affiliate links. If you buy something through one of these links, we may earn an affiliate commission.