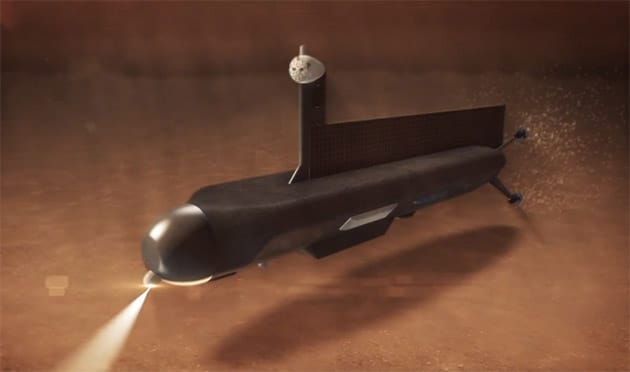 NASA has long announced that it wants to create a tough-as-nails submarine that can withstand extreme conditions, because it's going to explore the largest liquid methane/ethane sea on Saturn's biggest moon Titan. Now, the agency has released a concept video of the robotic submersible and also revealed more details about the potential mission at this year's Innovative Advanced Concepts (NIAC) Symposium. Despite being a natural satellite, Titan is pretty Earth-like with a dense atmosphere, and the agency likely wants to see if life once existed there or to look for clues on how life on Earth began. NASA envisions sending the unmanned vehicle on a 90-day mission exploring the depths of Titan's largest body of liquid ominously named Kraken Mare, collecting and analyzing samples the whole time.

The perfect autonomous submarine for Titan will have to be able to surface every now and then during its 1,250 mile journey like a sea mammal in order to beam data back to back to Earth. And, it has to use an energy source that can convert radioactive pellets into electricity (a technology already used on Cassini and Curiosity), since it will spend most of its time where sunlight can't reach. Finally, it has to be sturdy enough to survive Kraken Mare's strong waves and exceedingly cold temperatures that reach up to 90 Kelvin or -298 degrees Fahrenheit. The freezing point of water, as you know, is only 32 degrees F or 273.15 Kelvin.

At the moment, this submersible is nothing but a vision rendered on a computer by NASA Glenn's COMPASS Team and researchers from Applied Research Lab, though NASA wants to build an actual one by 2040. The agency doesn't have an operational Titan mission yet, so for all we know, the submarine could end up being paired with a quadcopter that it also wants to use to roam the moon's surface. Its scientists also haven't decided what the submarine's exact scientific goals will be, but they seem to have a number of ideas, as written in their paper:

The vehicle would observe – and perhaps ultimately exploit - tidal currents in the sea, which follow a cycle once per Titan day, or 16 Earth days. When surfaced, as well as communicating with Earth, the vehicle would use a mast-mounted camera to observe the sea state and shoreline landscape, and would record meteorological observations. Measurement of the trace organic components of the sea, which perhaps may exhibit prebiotic chemical evolution, will be an important objective, and a benthic sampler would acquire and analyze sediment from the seabed. These measurements, and seafloor morphology via sidescan sonar, may shed light on the historical cycles of filling and drying of Titan's seas. Models suggest Titan's active hydrological cycle may cause the north part of Kraken to be 'fresher' (more methane-rich) than the south, and the submarine's long traverse will explore these compositi on variations.

Titan isn't the only cold, large moon that NASA wants to visit: the agency recently got the funding to whip up a formal, viable mission to Jupiter's moon Europa, where a tough submarine will be just as useful.
Via: Discovery
Source: NASA (PDF), Physorg
In this article: nasa, saturn, space, submarine, titan
All products recommended by Engadget are selected by our editorial team, independent of our parent company. Some of our stories include affiliate links. If you buy something through one of these links, we may earn an affiliate commission.