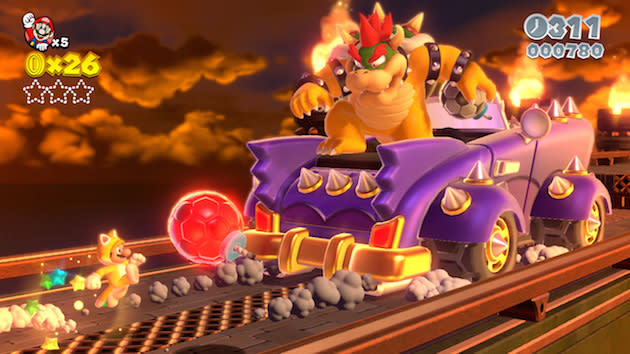 For the past 30 years, if you wanted a masterclass in video-game level-and-objective design you needn't look any further than a Mario title from Nintendo. That didn't change any with 2013's stellar Super Mario 3D World or last year's spin-off Captain Toad Treasure Tracker, either. As Pocket Gamer's Mark Brown dissects in the video below, the ingenuity lies in how the former communicates wrinkles and tasks to the player -- not with a series of terrible tutorials, but gameplay. This is something the game's director Koichi Hayashida draws from four-panel Japanese manga. The structure's called kishoutenketsu, and it comes directly from Mario creator Shigeru Miyamoto's time spent drawing comics; it's always been influential in how the company has approached game design.

The first portion takes place in a safe spot where you can't exactly fail while learning it. Next is further developing the idea, then "twisting it" in an unexpected way and ultimately throwing it away after mastery for the next new mechanic. In 3D World, Brown notes, it all happens in about five minutes. It'll be interesting to see how much of the community follows this sort of idea once Mario Maker (presumably) hits sometime later this year. Should you want to pick up some pointers before then, perhaps check out this in-depth interview Gamasutra did with Hayashida a few years back.

In this article: GameDesign, gaming, hd, hdpostcross, KoichiHayashida, mario, nintendo, ShigeruMiyamoto, SuperMario3DWorld, WiiU
All products recommended by Engadget are selected by our editorial team, independent of our parent company. Some of our stories include affiliate links. If you buy something through one of these links, we may earn an affiliate commission.