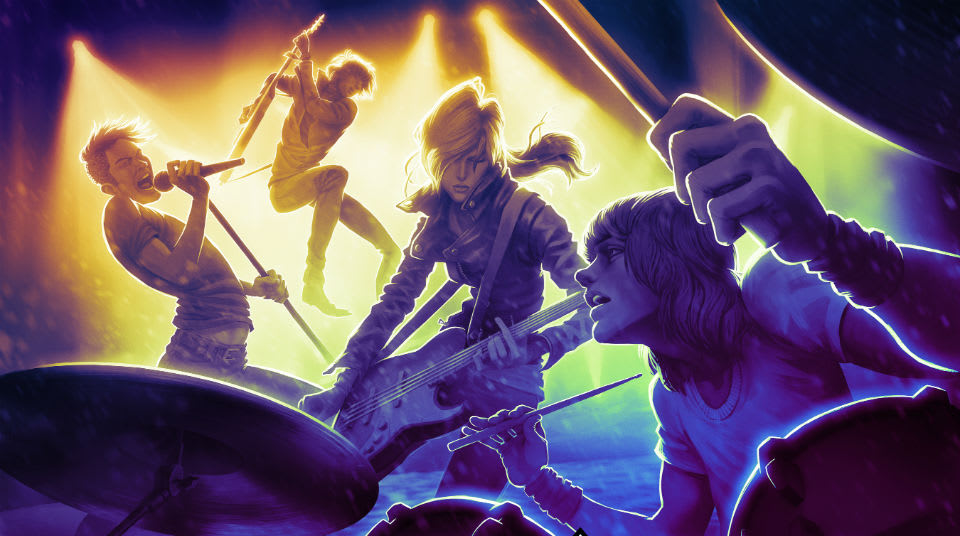 Walking onto the roof of the Shangri La Hotel in Santa Monica, California, I was nervous and curious to see Rock Band 4. After all it had been five years since Rock Band 3. Would it still feel good? Is this really the right time to bring back Harmonix's brilliant karaoke video game, with its comfy plastic instruments and catalog of songs? After playing it and then talking with Greg LoPiccolo, one of the creators of both Guitar Hero and Rock Band, my fears were laid to rest. Under a thick smear of sweet rock and roll, of course.

Rock Band 4 feels familiar in all the best ways, with low-impact, welcome changes that just feel right. The instruments, mostly indistinguishable from Rock Band 3's drums and guitar, still feel approachable and toy-like, well-suited to the game's cartoony musicians. Barring one intriguing new feature that we're not allowed to talk about just yet, the other changes are goofy fun. Take the new intros: The screen prompts you to yell, "Hello, Boston!" Are you ready to rock?" Unless you do your best Steven Tyler at an '80s Aerosmith concert, the whole shebang won't start. It also feels great to seamlessly put together a playlist. If you finish a song and want to keep going, one player picks the next jam from a list and others vote, selecting from categories like "play a song from 1991."

While the game still felt just right in my hands, I still wanted to know why Harmonix decided that right now was the time to bring it back. LoPiccolo expounded on that subject and more.

The last time we spoke was in March of 2013, just before Harmonix delivered the very last weekly downloadable update for Rock Band 3. My very first question for you then was, "Is the plan to bring Rock Band back in five years, otherwise known as the perfect window to hit the nostalgia market?" You said to me, "Well... we'll see!" You sounded like a man with a plan. Now here's Rock Band 4. Was this always the plan to bring Rock Band 4 out within a few years?

No. I can't in good conscience say this was always the plan. It was way more improvisational.

What was the plan, then?

We didn't ever want Rock Band to fade away. We love it! We love working on it; we love watching people have fun with it. It exceeded beyond our wildest expectations when it came out, but a lot of things have to line up if you're going to drop seven or eight figures on developing a video game, you know? One of the things I think was true was that after the eighth-gen consoles came out, our usual sweet spot isn't in year one. That's when Halo and the hardcore games come out. Our thinking was, let's wait to let these consoles establish themselves and then see what we got. Then we dipped our toe in the water and people got excited, so let's do it! 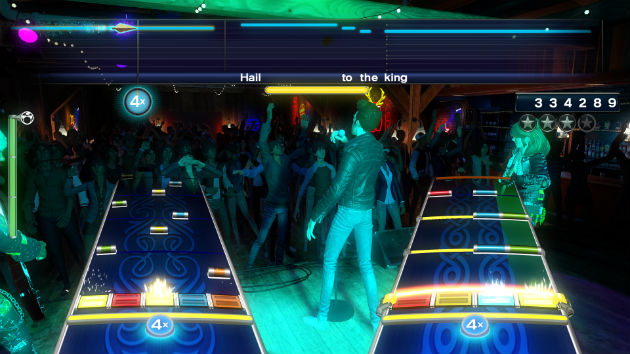 Speaking of the survey Harmonix put out earlier this year asking what people want from a new Rock Band. What surprised you about people's response?

I don't know if we were surprised so much as it confirmed what we hoped was true. It confirmed that people actually still cared about Rock Band. Yeah, people still want to play this game and they were very specific about what they cared about being in it. Like, DLC should carry over! People don't want to have to buy their songs again; they don't want to have to buy their instruments again if they still have them. So we took that stuff seriously and worked on a plan to carry all that stuff forward. Which was a lot of work.

I don't want to get too deep in the weeds on the business end, but I know that licensing these songs has always been the biggest hurdle. Has anything changed in the past five years since Rock Band 3 to make your lives easier?

Not really. We occupy this weird little corner of that ecosystem. The thing that makes us unique, where those streaming issues aren't really relevant, is that we need track masters to craft our gameplay. You don't stream masters. Someone's got to go down to the basement, blow the dust off them and transfer them to us. That's still true: We still hand build our gameplay from the original master recordings. 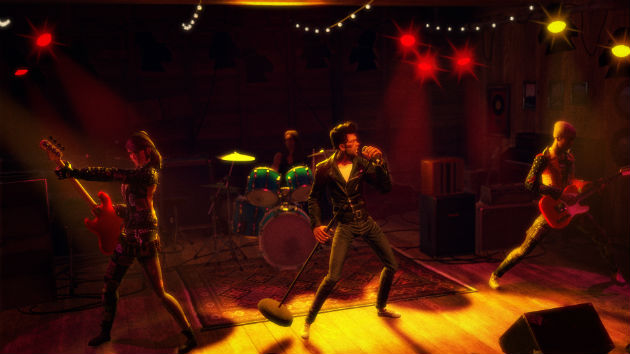 Has there been any change in how you produce a song or did you just go back to the old process because it works?

Well, we've had to change our authoring format for our new features. We have our freestyle vocal feature which means that the game needs to know what key you're singing in at any given time. If you sing on hard or expert difficulty, you don't have to stick to the authored notes. You can sing any chord and as long as it's in tune with the song, you can score on that. That didn't exist in the old songs so we had to redo that and go back to retrofit it into the old songs as well.

In April, I got to sit down with Guitar Hero Live and we discussed their turnaround time for getting a song into their game. The way they explained their pipeline was that if there's a hit single making the rounds on YouTube, they can turn it around in a day and have it online. Have you changed your process at all to satisfy a faster pace?

Most of the material our players care about isn't necessarily from last month; it's from 10 years ago!

As far as I can tell, that's not what's driving our audience. New songs are always coming, but most of the material our players care about isn't necessarily from last month; it's from 10 years ago! Or 30 years ago! So we want to continue to add stuff to our catalog that's current, and Rock Band 4 will have current songs, but it's all about the catalog, having this huge library of material. We have 2,000-plus songs at this point. That's awesome and that's something we're really proud of. We've made this huge effort to cover the breadth of rock history as best we can, across styles and decades.

Literally every person I talked to at Harmonix who worked on Rock Band told me that they had the same regret: That they never got Led Zeppelin. So tell me: Zeppelin?

We would still like Zeppelin. Clearly. But I have nothing to tell you. 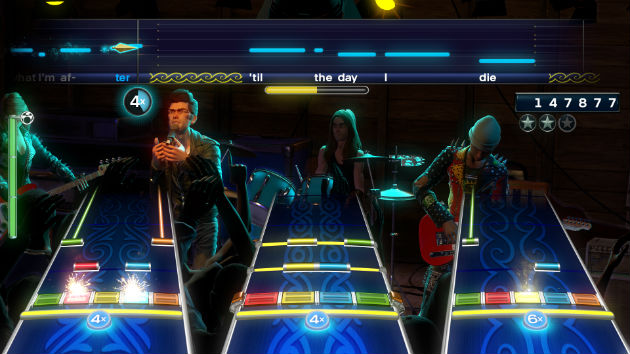 Mad Catz is helping publish Rock Band 4. How did that happen?

We worked with them on Rock Band 3 so our relationship does go back a ways. They made the Mustang guitar for us as well as the keyboard and did a terrific job. So when we got in touch with them about the idea of bringing back Rock Band 4, they were into it and they were an ideal partner for us.

Was there ever a point that you weren't going to call this Rock Band 4? Slapping a number on a popular video game series carries a lot of weight. It can push away new players unfamiliar with a series, but it also lets your most diehard fans know that this is the real deal, a full-on sequel.

There was a little bit of back and forth about that but everything else just seemed too gimmicky. Rock Band Reunion! That's stupid. At the end we didn't even argue about it. It's Rock Band 4.

In this article: e32015, harmonix, hdpostcross, interview, microsoft, playstation4, rockband4, sony, uk-feature, xboxone
All products recommended by Engadget are selected by our editorial team, independent of our parent company. Some of our stories include affiliate links. If you buy something through one of these links, we may earn an affiliate commission.