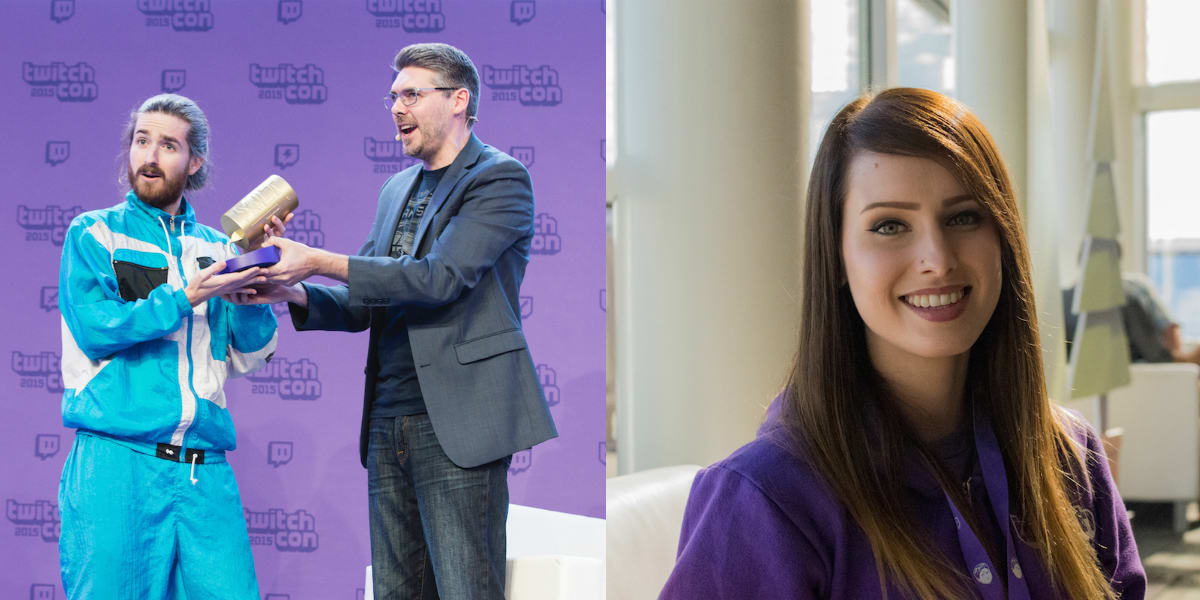 Twitch is exactly what you make of it. Looking for some dating advice while a broadcaster drinks wine and plays Minesweeper? There's a channel for that. How about a corny sci-fi show about a guy sent back from the future to conquer video games before they turn sentient and kill us all? You're covered there, too. And while those two channels on the livestreaming service are wildly different from one another, they share a commonality: Each requires a grueling amount of work to produce on a regular basis. Respective creators Sonja "OMGitsfirefoxx" Reid and Futureman Gaming took different paths to make it into Twitch's highly coveted Partner program, a revenue-sharing system between some 12,000 contracted broadcasters and the service. But their motivation to succeed hasn't stopped since they've "made it" and now earn a living from streaming on the site.

Before he adopted the Futureman Gaming persona, Chris (who prefers we don't disclose his last name) was a full-time second grade teacher at a special needs school in New York City. He discovered Twitch by accident one day while looking for info on the military shooter Battlefield 4. Drawn to the fact that he was seeing live, unfiltered gameplay and commentary, he decided to try his hand at broadcasting on the site. From there, he made an account and broadcast for a few months, but only casually at first. Frustrated by the lack of viewers to his personal channel, he took some time off to reevaluate how he could get more than just personal friends to stick around and watch his gameplay.

"I was getting pushed in terms of teach, get off of work, stream for five or six hours [and] work on some stuff. Sleep was always down on the list of things to do."

Rather than rely on a collapsible green screen -- what he refers to as a "game changer" -- to remove background clutter like most other streamers, Futureman uses it as a canvas to set himself apart on the service. "I thought, 'I can create anything. Why not develop a whole story?'" he said during an interview at TwitchCon. Thus, the Terminator-esque narrative for his channel was born: Futureman travels back in time to play games from start to finish in an attempt to save humanity from impending doom; from video games that will, otherwise, destroy us all. His main setup for broadcasting is a crudely assembled CGI spaceship cockpit that isn't without its do-it-yourself charm. For an analogue, think early-'90s public access TV levels of kitsch and you're basically there.

Despite his best efforts to court it virally, Twitch success came for Futureman in a roundabout way. Ahead of his channel launch last September, he posted a cryptic message to the Twitch subreddit saying that he'd come from the future to save humanity from video games. He also linked to a charmingly lo-fi video that serves as his intro for broadcasts. "I wanted to do something that people would get excited about," he said. But it was to no great effect -- he still only had a modest 2,000 followers and a crew of about 30 regulars who'd hang out in chat during his broadcasts. It wasn't until a Twitch employee caught one of Futureman's broadcasts in February that traffic picked up in a big way. Chat numbers then quickly grew to 2,000 viewers. Within a few days he was Partnered, and it wasn't long before he quit his day job.

"I was getting pushed in terms of teach, get off of work, stream for five or six hours [and] work on some stuff," he said of his once punishing schedule. "Sleep was always down on the list of things to do." Since achieving status with Twitch, his follower count has ballooned to over 40,000. His schedule is a bit scattershot though, and for the month of October, Futureman has only streamed seven times as of this writing for around 45 hours total.

Sci-fi kitsch isn't all that Futureman broadcasts on Twitch; he also dabbles in music streaming -- a fairly new category for the service. He has a recurring show dubbed DJs in Space where he'll invite a local DJ to his apartment to play music while he produces trippy visual effects on the fly. The last edition of the show ran for nearly six hours long with no signs of fatigue from Futureman.

Whereas a Futureman production can be considered "polished" for Twitch, an OMGitsfirefoxx broadcast is a little more back to basics. Most of the time it's just Reid sitting in a desk chair, microphone in front of her, playing games and talking with fellow broadcasters. Reid's casts have themes to them like "$uper $ellout $ubscriber $exy $andstorm $undays," where she doles out giveaways for every new 350 followers she gets. Or a "Minesweeper and Chill" one-off where she and other female streamers, including HayliNic, answered dating and sex questions for donors for nearly seven hours, each pledging to call ex-boyfriends on-stream when certain follower thresholds were met.

Reid began streaming mid-2013 while working retail, but it wasn't until she joined a daily Minecraft show with CaptainSparklez and a few other top streamers, dubbed Mianite, that her popularity began to soar. She achieved Partner status in January 2014 and that summer she quit her day job to broadcast on Twitch full-time. Since then, she's amassed over 660,000 followers and has become the most popular female broadcaster on the service. In contrast, her male counterpart is none other than Twitch co-founder Justin Kan (the "Justin" in Twitch progenitor Justin.tv) with nearly 4 million followers.

"I love this job so much. But it can be really toxic because you only grow as much, earn as much and you only get as big as the effort you put in."

The 24-year-old can spend 40 hours or more streaming any given week, whether it's playing Winesweeper (as she calls it), Minecraft or Counter-Strike: Global Offensive. But while most people's workweeks end after logging that much time, that's just the beginning of hers. Beyond her Twitch responsibilities, she runs a Minecraft server, as well as records and edits clips for YouTube and "off-brand" promotional content like sponsored streams or social media activity. "It's hard to say how many hours in a week I work," she said with a laugh. Working six or seven days in a row isn't uncommon for Reid and she's always in front of her computer, even if it's to relax by watching anime or playing World of Warcraft. What little personal time she has after multi-hour streams and other responsibilities goes into sewing ("I feel like a grandma") or just laying down for an hour before a broadcast.

With that type of schedule, burnout is a serious concern for Reid. Her depression doesn't make it any easier, either. Other casters suffer from this too and it's why Twitch introduced video uploads and playlist features, due out next year (Futureman currently has access to a beta version), to make the life of a pro streamer more manageable. As welcome as those tools will be, however, Reid isn't exactly sure how helpful they'll prove. "I don't really think it's going to alleviate anything about being away from Twitch," she said. When a channel isn't active for an extended period of time, it runs the risk of losing followers, and, more importantly, donors; a little downtime or vacation can come at the sacrifice of subscribers and ad revenue.

"I love this job so much," she said. "But it can be really toxic because you only grow as much, earn as much and you only get as big as the effort you put in." In spite of this, Reid pushes herself to maintain her rank. "I'm the top female broadcaster; I'm proud of that," she said. "I'm going to keep that."

Neither Reid nor Futureman were willing to put an exact number on how much they make streaming. Reid has about 2,000 subscribers paying $5 per month for unique chat emotes, community perks and access to her private Snapchat account. Of that $5, she keeps $3.50 and the rest goes to Twitch. Other top broadcasters, who spoke on the condition of anonymity, said that they're getting a 70/30 split with Twitch as well. Reid won't reveal her exact income, but doing the math suggests she's pulling in at least $7,000 per month from Twitch subscriptions alone before factoring in ad revenue. Then there's the money she makes from YouTube and her "off-brand" income streams.

"I'm able to do this full-time and work on it full-time. But I'm not rich."

Futureman said he makes about the same as he did teaching, putting that Twitch income figure at less than $60,000 per year. "I'm able to do this full-time and work on it full-time," he said. "But I'm not rich." That said, he is able to afford rent and the high cost of living in New York City.

As both Reid and Futureman have highlighted, the life of a professional Twitch streamer isn't the gig for everyone. However, both broadcasters have advice for new streamers with partnership aspirations: Play games you enjoy and don't be discouraged by low viewer counts when you're starting out. Even now, Reid guards herself against the latter by putting a sticker on her monitor where the running viewer tally displays. "It has totally changed my attitude because I'm not constantly looking over at it, asking myself why I'm losing followers," she said.

Futureman agrees: "If people are chatting, that's my number one priority, and trying to make the show as entertaining as possible for everybody who's there." He also had more heartfelt advice to dole out, too.

"For a second, I thought I was too late [to the streaming scene]," he said. "It's never too late to go and try to make something happen."

*An earlier version of this article said that items were given away for every 350 subscribers*. That was incorrect and the story has been updated to reflect that.
In this article: futuremangaming, gaming, hd, hdpostcross, interview, omgitsfirefoxx, sonjareid, streaming, twitch, twitchcon, twitchcon2015
All products recommended by Engadget are selected by our editorial team, independent of our parent company. Some of our stories include affiliate links. If you buy something through one of these links, we may earn an affiliate commission.